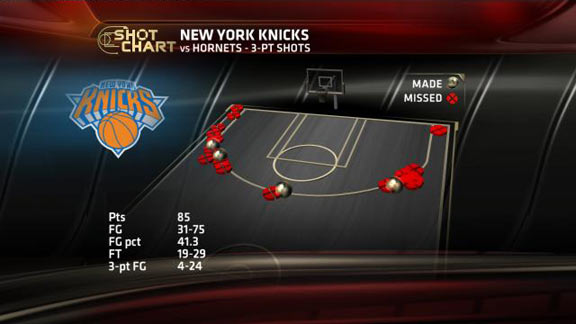 The Knicks shot just 4-for-24 (shot locations above) from 3-point range in Friday's lossThe New Orleans Hornets figured out how to thwart the best efforts of New York Knicks guard Jeremy Lin.

Lin matched the NBA’s season high for turnovers with nine, eight coming in the first half of Friday night’s loss.

Most Turnovers In Single-Game
This Season

Lin did finish with 26 points, but they didn’t come as easily as on some other nights.

Lin entered shooting 61 percent from inside five feet this season, netting about 10 points-per-game on those shots. He was just 2-for-8 on those opportunities in this contest.

The two field goals were his fewest from in-close in this eight-game run, in which the Knicks are now 7-1.

Lin now has 45 turnovers in his seven starts, the most by any player (via the Elias Sports Bureau) in the first seven starts of his career since the 1976-77 season (the first season after the NBA/ABA merger).

The Miami Heat finished off their six-game road trip by blowing out the Cleveland Cavaliers. Miami went 5-1 on its road trip, and its half-court offense was significantly better on this road trip than its last one.

The chart on the right shows the difference between the two. In the first go around, a five-game trip, the Heat were outscored by 45 points in half court.

They outscored opponents by 80 points in half court in these six games.

The Hornets weren’t the only team with limited success this season to win on Friday.

The Bobcats got their first win since January 14. To put that into perspective: On that date, Jeremy Lin had 30,000 Twitter followers. He now has more than 400,000.

Statistical Feat of the Night

Dwight Howard had his seventh 20-point, 20-rebound game this season in the Orlando Magic’s win against the Milwaukee Bucks. No other player in the NBA has more than two such games.

Howard has the fourth-most 20/20 games of any player since the NBA and ABA merged. Via the Elias Sports Bureau, his 39 are two shy of Charles Barkley for third-most and three shy of Hakeem Olajuwon for second-most.

Moses Malone has the most since then, with 109.

Plus-Minus Note of the Night

The -15 was a season-worst for Haslem, who entered +42 in his previous four games.