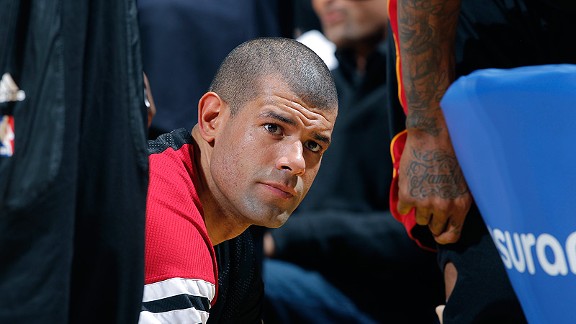 "If you call timeout," says the Heat's Shane Battier, "you allow a team to set their defense."

HoopIdea is reimagining NBA basketball, and we kicked things off with a plea to speed up the end of close games. Timeouts, fouls, free throws, substitutions, video reviews and the like can turn the last two minutes of riveting NBA action into a 15-minute collection of dead ball time with short breaks for basketball.

The argument for those dead balls centers around the idea that coaches need to direct their players. As David Thorpe put it on Google+, “we need timeouts in this game, otherwise the games will be even more ragged than they sometimes are.” He expanded the point on the NBA Today podcast speaking for many coaches when he says coaches needed those dead balls to put their imprint on the game, and to raise the quality of play.

But we had some counter theories: Henry Abbott noted that late-game offense tends to be horrible, and wondered if those timeouts were not, as advertised, helping teams score baskets ... but might instead be very effective at strengthening the defense. Subbing in the best defenders, settling on the team's plan to handle different likely plays ... maybe that's what matters most about timeouts.

In a follow-up, I presented a further wrinkle: that as useful as timeouts can be, there are plenty of times when a timeout hurts the offense. As much as anything, they give coaches, many with insecure jobs, the chance to put their imprint on the final moments and fulfill the perhaps ill-placed expectations of their profession. But do they do that at the expense of spontaneous play, which can lead to easy buckets?

So do timeouts help the offense or defense more at the end of games?

Thanks to the people at NBA.com/stats, we now have some insight. According to their research, NBA teams are more likely to score in crunch time if they don't call timeout. It turns out that in no scenario were teams more likely to make a shot when they called timeout.

This is true even though fast-break points were excluded entirely from the analysis -- to present an apples-to-apples comparison of half-court plays. The downside of this exclusion is that one of the big arguments against timeouts is that they slow play. In other words, if you included them, timeouts could look even worse.

Some more important notes from the NBA's stats wizards:

So why do offenses appear to shoot worse coming out of timeouts?

Miami Heat forward Shane Battier cites lessons learned from Mike Krzyzewski at Duke, telling Heat Index’s Tom Haberstroh: “I was born and raised in the Coach K school of ‘in closing situations, not taking a timeout,’” Battier says. "Defenses aren’t as prepared after a late bucket to tie or take the lead because emotionally teams aren’t as prepared to get that stop. If you call timeout you allow a team to set their defense, focus in. Everyone knows exactly what everyone runs anyway.”

Battier does like to use the time afforded by a timeout to check out the opponent’s personnel, which helps him anticipate the play they are likely to run. But in his mind, you can forfeit the emotional and strategic advantages that timeouts are meant to provide by calling one.

I argued that coaches can fall into the trap of "Hero Coaching" because there is social and psychological pressure to do something, anything, to tangibly impact the end of the game. Battier was more blunt: “Coaches want to show that they're worth the millions that they're getting paid, which is fair. And the public would say, "He drew up a great play, he’s earning his money."

While coaches like Gregg Popovich and Erik Spoelstra are famous for calling elegant plays out of timeouts, many NBA timeouts result in dead simple plays, like a high pick-and-roll or an isolation where most of the players watch the ball-handler.

Worst of all, it doesn't seem to work.