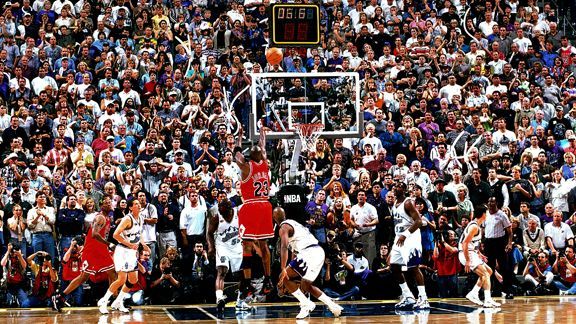 At HoopIdea, we’ve talked about the importance of continuous, live-ball action at the ends of games. Here is perhaps the best example ever.

With one minute remaining in Game 6 of the 1998 NBA Finals, John Stockton fed Karl Malone on the left block, circled through the key and found himself wide open on the opposite wing. Malone zipped the ball to Stockton, who nailed a huge 3 to put the Utah Jazz up 86-83 over the Chicago Bulls with 41.9 seconds to go.

The next 36 seconds of nonstop play may rank as the best in the history of the NBA.

Inbounding from half-court, Chicago quickly enters the ball to Michael Jordan and spreads the floor. With Utah’s help defenders occupied, Jordan hesitates and then blows past Bryon Russell for a layup that cuts the lead to a single point and takes only five seconds off the clock.

Pulses pounding, the Jazz jog the ball up court and again Stockton looks for Malone on the left block. This time the Jazz use a Jeff Hornacek cross-screen to free up Malone, but Hornacek’s defender, Jordan, never leaves the paint. As Malone catches the ball, Jordan instantly swoops in from the baseline side, swipes down on the ball and knocks it away from the stunned Malone.

Suddenly, instead of controlling the clock, score and ball, the Jazz are on their heels heading back on defense. Jordan dribbles up the left wing with 17 seconds on the clock while his teammates fan out along the 3-point line.

Then it all happens:

Dennis Rodman cuts through to clear the middle of the floor.

Russell slides to the floor, Jordan elevates, the ball swishes through the net.

It’s the most famous shot in NBA history.

As incredible and dynamic as Jordan was in that sequence, part of what made it so intense and iconic was that his brilliance was never interrupted. Reader Alex Bogach reminded us of this, writing “part of what makes MJ's shot so special, in my opinion, is that when Jordan steals the ball there is no timeout called. Perhaps a ‘no timeout while the ball is live’ rule could make the game more entertaining.”

Not calling timeout is different from not having a plan. On the final shot, it’s Rodman’s cut across the middle that removes the defender Russell might have expected to offer help. Because the Bulls were prepared for this scenario, the Jazz do not have time to decide how to defend Jordan on the last play. Russell is left on an island, and we are left with one of the defining moments in sports history.