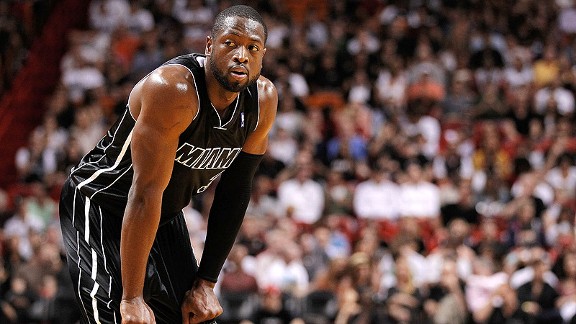 What will the life of an aging NBA superstar be like 10 years from now?

Dwyane Wade knew he would be removed from the game before the computers did.

Before the three-millimeter silicon sticker that sat unobtrusively on the inside of his bottom lip gleaned from his saliva that his 1.020 hydration level was flirting with the bottom register of acceptability, that his glucose had dipped, that his basal catecholamine excretions had decreased, and that their aggregate effect suggested nine, 12, and five percent expected dips in his straight line speed, vertical leap, and visual reaction time, while raising CRP, fibrinogen, and white blood cell count to levels that increased his probability of sustaining a tendon strain by 0.04; before all this information was recorded, transmitted to the screens Rick from quality control stared at each night, and routed down to Coach Battier -- its arrival announced by a ‘bing’ of the iPad he wore around his wrist -- Wade sensed it.

So when he was taken out, he was neither surprised nor angry. It just happened.

The 40-year old sat on the bench, gulped the 12.4 fluid ounce solution prepared for him, and waited for it to work. As he’d been taught to do, he quieted his mind -- let it slack, dropping each piece of emotion and anxiety accumulated over his last eight minutes of floor time -- before re-engaging with the game. He closed his eyes and walked through scenarios. Then, with four minutes remaining, Battier tapped him on the shoulder. He was back in.

Despite having entered the game at something of a peak -- their collective win expectancy was 5 percent higher than their season mean, a fact that owed largely to a propitious number of players who registered optimal sleep scores over the previous week -- the Heat were losing to the Supersonics by six points. And despite Wade's unusual workload -- Kyle Lowry’s elevated injury markers forced the veteran into an expanded role, and demanded the absorption of 19 percent more force by his almost four-decade-old knees than his pregame target prescribed -- he had performed capably. 24 points on 14 shots. Nine rebounds against an expected total of 5.84. A wins produced differential of +0.073.

The game ebbed and flowed. Over the next three minutes, Wade’s readings stayed squarely in optimal range as Miami narrowed the lead to two. Then, as he still had a tendency to do, despite the humbling influence of old age, Wade became emboldened. With seven seconds left, he called his own number: a left-side screen at the top of the key. Wade, ball in hand, read the coverage, made a decision, and deked right before crashing left -- flush into a hedging Derrick Favors. He didn’t anticipate the seven-footer’s floor location, and so when he resorted to his only remaining option -- a fallaway 3-pointer with, he’d later learn, a .17 probability of success given his present bioindicators, adjusted career averages, and floor location -- the shot lacked the arc and lift it might have had a decade earlier. It clanked off the front of the rim and into the hands of Anthony Davis.

On the long flight home, while the other players gossiped and played cards, Wade sat alone and reflected on that final play. His performance had been, on balance, a good one, but the final sequence conveyed a lapse of discipline. His chance to complete a wonderful narrative, create an ethereal moment in which he was 25 again for just one night, ended with just another loss. He’d been selfish.

Wade slouched back in his seat. He slipped his biofeedback headphones over the electrode-equipped skullcap he favored on long flights, and listened to the playlist that had been tailored specifically to his typical postgame EEG readings. As the sounds and sensors gently calibrated his neuroelectricity, Wade pulled out a touch screen and reviewed his metrics. His emotional regulation, focus, and attention capacity, as measured by the skullcap, were fine. Better than that. While physically, he was on a downward trajectory, cognitively he was in his prime. As he often did, he'd made intelligent, snap decisions the entire game -- up until that final play.

A message popped onto his screen and alerted him that his program was ready.

Shortly after game's end, as he did at least 82 times a year, Rick converted the game tape to a VRML file, ran it through an algorithm that identified the most high-leverage mistakes each individual player had made, and then corrected them. In Wade’s simulation, now, rather than flying into Favors, he cuts left into the screen, then bounces back to the right as Rubio fights to slip it. With the defense spread, Wade has the virtual option of pulling up for an open 15-footer, a shot associated with a 0.53 probability of success, or eking out one final drive to the basket -- a more difficult success rate to peg, but somewhere in 0.49-0.63 range. Neither optimal, but each significant improvements.

The three-dimensional file, uploaded to the virtual reality immersion glasses Wade could only choose the frames for last season, trained both his accuracy and speed. The glasses come in handy on the road, as he’s unable to use the team’s live-action neurofeedback facility then. When Wade first encountered the program nine years earlier, he’d needed one to two seconds to recognize the play, assess his options, and choose the optimal course. Now, his decision-making had become almost wholly subconscious; it rarely took him more than a quarter of a second to play the odds.

Wade put on his glasses and began his training. He relived the scenarios he’d just faced over and over again. He saw himself succeeding, hitting the jumper, making the layup, and a confidence slowly pushed aside his sense of failure. As he ran through his 94th rep, a team medical assistant wordlessly placed a bottle of water and an oblong pill -- a compound of vitamins A, B, D, glutamine, niacin, DHEA, piracetam, and aspirin, specially titrated to optimize Wade’s unique blood chemistry -- on the tray beside him.

Wade hit pause, removed his glasses, and stared blankly at the back of the seat ahead of him. Wade’s troubled, at times, when he has room to think about things that aren’t basketball and their implications: the ways his life has changed, the way he’s abetted it, the steadily shrinking space that belongs just to him. When his celebrity first came, aspects of his privacy disappeared. When it deepened, his personal space became cramped by it. But now even the most basic facts of his existence -- his DNA, his blood, his urine -- are public. They’re collected, coded, and probed and prodded by teams of strangers who haven't as much as made eye contact with him but are still acquainted with the most intimate, private details of his life. What’s left that’s just his?

Wade placed the pill on his tongue, chased it with the glass of water, and slid the glasses back on. They were scheduled to touch down in Miami in three hours, and he still had plenty to do.

Thank you to Jason Sada of Axon, Isaiah Kacyvenski and Ben Schlatka of mc10 and Richard Dry of Edge10 for their insights.