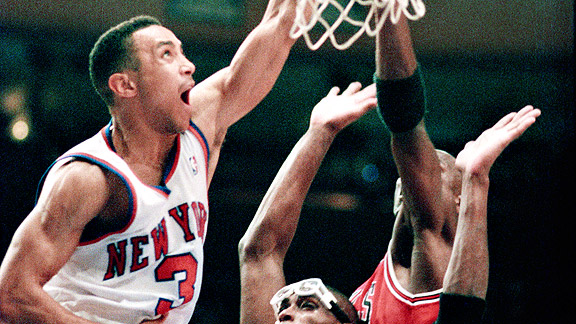 John Starks posterized Horace Grant, but that isn't even half the story

After winning 60 games and the top seed in the East, the 1992-93 Knicks were still underdogs when they met the two-time defending champion Bulls in the Eastern Conference Finals. New York guard John Starks had been an underdog his entire improbable career, but found himself with the ball and a chance to take a commanding 2-0 series lead over the champs.

With 50 seconds left in Game 2, Starks dribbled on the right wing as Patrick Ewing rushed over to set a screen intended to spring Starks into the middle of the court. But instead of using the screen, Starks hesitated, feinted middle then exploded into the wide open space along the baseline. Bulls forward Horace Grant rotated to meet him outside the paint but arrived a step late. Starks gathered off of two feet and rocketed into the rafters of Madison Square Garden to deliver a violent left-handed flush that dislodged Grant’s goggles and the sanity of Knicks fans everywhere. For good measure, Michael Jordan appeared in the poster to futilely swipe at the ball as Starks flew by.

Nothing and everything made sense; Starks was up, Jordan was down. The rim-rattling dunk shook the basketball world to its core.

Over on the New York bench, a young assistant was startled -- not by the outrageous dunk, but by a strange mutation in Chicago’s pick-and-roll defense. What Jeff Van Gundy saw on that play would change the series, and inform the evolution of NBA defense over the next 20 years.

“That was the first time, late in the fourth quarter, that I had ever seen in the NBA any team force the ball to the baseline in the side pick-and-roll,” says Van Gundy.

“I know they weren’t well-coordinated and that’s what led to that dunk, but I think it turned the series around for them.”

The Bulls' defense had adapted right in front of the world and almost no one noticed. Though the adjustment led to an iconic moment for their opponents, the Bulls continued to use this new coverage on side pick-and-rolls to dismantle the Knicks, and particularly Starks, who averaged more than six turnovers in four straight losses while his scoring and assist averages plummeted.

NBA defenses built off of this moment over the next 20 years, and today’s Chicago Bulls, coached by defensive genius Tom Thibodeau, are the finest example how this simple idea has evolved into a devastating strategy for defending pick-and-rolls.

On every pick-and-roll, the Bulls send the ball handler away from the middle of the court. On side pick-and-rolls, that means forcing the ball down to the baseline, where the offense’s options quickly diminish.

A detailed examination of the Bulls' pick-and-roll philosophy gets pretty granular pretty quickly, but the guiding principle is dictating where the ball handler can go -- or more fundamentally, can’t go -- and loading up the help defense accordingly.

Against Starks and the 1993 Knicks, Horace Grant was a step or two late. But today’s Bulls, aided by altered illegal defense rules that allow for Thibodeau’s signature strong side zone defense, are virtually always on time.

The history of NBA strategy is a conversation, or argument, between styles. Chuck Daly’s Bad Boy Pistons were a response to Pat Riley’s Showtime Lakers. While Thibodeau, then an assistant with Van Gundy in Houston, was designing defenses to chew up pick-and-rolls, current Knicks coach Mike D’Antoni’s spread pick-and-roll offense provided the counterargument.

The goal of Thibodeau’s pick-and-roll coverages is to “keep the ball on the strong side to limit how much the weak side has to help and protect, so you’re not getting caught up in long rotations,” according to Van Gundy.

Not coincidentally, those long rotations and closeouts are precisely what D’Antoni’s offense is designed to create. In fact, Van Gundy credits the system D’Antoni developed in Phoenix with helping to advance defensive schemes around the league: “The high pick-and-roll with Phoenix with four shooters and Stoudemire rolling to the rim made it so you couldn’t show,” meaning the help-and-recover schemes teams had been using for years simply weren’t tight enough to prevent Phoenix, with their extra shooter (the now endemic Stretch Big Man) from getting wide open looks.

At its maddening best, D’Antoni’s offense generates wide swaths of space around the paint by stationing three shooters around a pick-and-roll involving a dynamic ball handler and an aggressively rolling big man.

But since returning their full complement of players, the Knicks have struggled, winning just three of their last 11 games. It comes as no surprise that the Knicks are also running far fewer pick-and-rolls.

The outlook is gloomy in Gotham, but remember that Euro-influenced drive-and-kick offenses that spread the floor with multiple attacking wings has historically been as successful as any against Thibodeau defenses. The Orlando Magic bounced the Celtics from the 2009 playoffs (while Thibodeau was the defensive assistant) with that strategy, and the Knicks have enough versatile scorers to exploit the Bulls' defensive rotations.

But to do that, to overcome Chicago’s strong-side pressure, the Knicks must adhere to the space and movement principals of D’Antoni’s system. They must keep the ball whipping around the perimeter, with either the dribble or the pass. Holding the ball, even to fake, and even when the fake is effective, only allows Chicago’s help defenders time to get in position.

This is one of the few NBA games in which the name on the front of the jersey matters nearly as much as those on the back. There's a historical backdrop of bad blood, but tonight also puts a fine point on a broader philosophical conversation between D’Antoni's spread offense, at its best the most productive system yet developed, and Thibodeau’s league-leading defense.

The echo from that roaring Starks dunk along the baseline can be heard throughout this game, in the howls of its passionate fans, and the tactical grappling of its coaches and players.