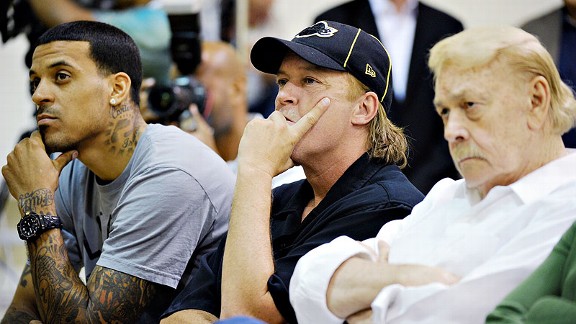 Going into last week's trade deadline, the Lakers had various priorities, but, interestingly, not all of them had to do with fielding the best basketball team imaginable.

The package they traded for point guard Ramon Sessions included the stale contracts of Luke Walton and Jason Kapono. And that's no small part of the reason the team had to ship out a potentially valuable first-round pick to get the Cavaliers to agree. Similarly, they recently traded Lamar Odom for a pick (albeit as part of a larger scheme to get Chris Paul that famously fell apart). They have saved money in various deals through the years, including Vladimir Radmanovic, Chris Mihm and Adam Morrison.

Not to mention, during the lockout, they took the step of aggressively trimming all kinds of staff, cutting loose various video guys and the like.

Meanwhile, isn't the story that this business is made of money, in the best media market in the NBA, with insanely high ticket prices, no competition from the NFL and one of the richest local TV deals in the history of sports?

Forbes says the local TV deal alone will bring the team an average of more than $200 million a year for the next 15 years.

Why on earth would they ever do something like fire the video guy, or give up a pick in the name of ditching a contract?

There are various answers. One is that they're paying more than $85 million in salaries this season. Also, while a lot of NBA teams are hobbies for their owners who make their billions elsewhere, the Lakers are the primary business of the Buss family -- who are wealthy compared to you and me, but not compared to many in the owners' club. And, of course, the various layers of luxury tax negotiated into the new CBA will punish the team mightily this year, and even more severely in the future, which requires some planning now.

But the biggest answer has to do with one of the crown jewels of last summer's multi-faceted lockout talks: The NBA now has aggressive revenue sharing.

And sources say that alone is set to cost the Lakers very close to $50 million this year, and something similar every year of the new collective bargaining agreement.

Imagine the Lakers were paying three Kobe Bryants this year, but two of them couldn't play a single minute, while still receiving full salaries. Few would wonder why the team was feeling the financial pinch in that scenario. In terms of how it affects the bottom line, however, revenue sharing is effectively that.

The way NBA revenue sharing works, now, the poorest teams can expect some serious help. Player costs were slashed right off the top -- most teams will save something like $10 million just from the players agreeing to take a fat cut in their share of league-wide revenues. On top of that, teams most in need of help, for instance in Memphis, Milwaukee, Indiana, New Orleans and the like, can expect to receive $10 or $20 million annually in money taken straight from the league's fat cats.

And the Lakers are the fattest cat -- at least in terms of how their basketball business performs.

Last year rich teams shared about $40 million with poor teams. That number is now approaching $200 million, and the Lakers lead a very short list of teams paying in.

So if you see the Lakers acting like they are feeling the financial pinch ... revenue sharing is a big part of the reason.