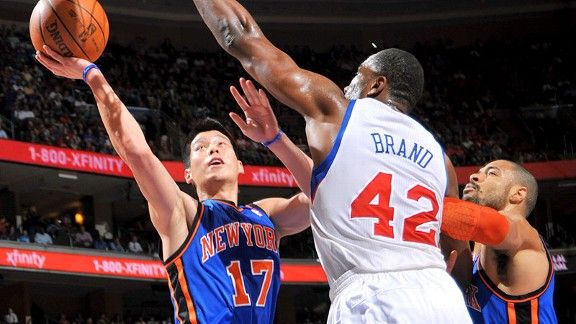 Jeremy Lin drives to the basket in the Knicks' win over the 76ers Wednesday night.

The New York Knicks just want to be like Mike – Woodson that is. The Knicks improved to 5-0 under new head coach Mike Woodson, though Wednesday’s 82-79 win over the Philadelphia 76ers was quite unlike their previous four victories with Woodson at the helm:

• The 3-point margin is the smallest during the win streak; the Knicks had won their previous four games by 22.5 points per game.

• The Knicks shot 2-13 (15 percent) from beyond the arc versus Philadelphia, after making more than 40 percent of their 3-point attempts in their first four games under Woodson.

• New York also struggled on the break Wednesday, scoring just 10 points in transition, compared to an average of 23 transition points per game during the win streak prior to tonight.

Instead, New York pounded the ball inside and crashed the offensive boards to get easy points against Philadelphia. The Knicks outscored the 76ers 32-20 in the paint and 15-5 on second-chance opportunities.

This is just the second time the Knicks have won five games in row following an in-season coaching change, according to the Elias Sports Bureau. In the 1979-80 season, Red Holzman replaced Willis Reed and the Knicks won their next five games en route to a 31-51 final record.

The Chicago Bulls trailed 69-62 through the first three quarters of their game versus the Toronto Raptors, but used a 20-0 run to outscore the Raptors 32-15 in the final period for the 94-82 win.

The Bulls' reserves came up huge in the fourth quarter with 28 of the team’s 32 points. Kyle Korver and John Lucas combined to shoot 9-for-14 and scored 23 points after going scoreless in the first three quarters.

Three times a charm for Gordon

Ben Gordon erupted for 45 points, but missed a 21-footer with two seconds left, and the Denver Nuggets escaped with a 116-115 win over the Detroit Pistons.

Gordon converted all nine of his shots from beyond the arc, matching the most made 3-pointers without a miss in a game in NBA history. Gordon also achieved the feat in the 2005-06 season and Latrell Spreewell did it in the 2002-03 season.

The San Antonio Spurs beat the Minnesota Timberwolves 116-100, extending their home win streak over the Timberwolves to 15 games. That is the fourth-longest current home winning streak by one team against an opponent, according to the Elias Sports Bureau.