LOS ANGELES -- For the Los Angeles Clippers, it was the closest thing to an engraved invitation for a win.

LaMarcus Aldridge was sidelined with a sprained left elbow, forcing the visiting Portland Trail Blazers (7-18 on the road entering play) to field a starting frontcourt of J.J. Hickson and Joel Przybilla. Although Portland had notched a couple of quality wins in recent weeks, they're a team that, for the most part, is playing out the string. Aldridge's absence merely formalized that on Friday night. 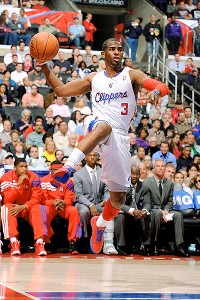 The Clippers' out pitch, Chris Paul

Yet, the undermanned Trail Blazers scrapped hard and Hickson became just the latest in a procession of middling players to torch the Clippers. The bouncy, castaway forward racked up 29 points and 18 rebounds on 13-for-19 shooting from the field. If not for a couple of missed free throws by Hickson and a series of uninspired possessions in the final minute, Portland might've soured what has been, thus far, a restorative homestand for the Clippers.

In the end, the Clippers needed what they generally require to close out games -- a stroke of genius by Chris Paul. Trailing 97-96 with 13.9 seconds to play, he delivered, per usual:

The game lacked any semblance of rhythm for most of the night, but as the two teams went small in the fourth quarter, the pyrotechnics started. After Jordan checked out midway through the fourth quarter, the seas of the Clippers' interior defense parted for Hickson. With no rim protection, Hickson scored two baskets at close range to give the Trail Blazers a 3-point lead. In the eight possessions Jordan was off the floor, an undersized, helpless Clippers' defense gave up 13 points. The Clippers' perplexed center could only watch from the bench.

Offensively, the Clippers were able to keep pace with Trail Blazers. Caron Butler attacked baseline, then just plain attacked Batum a couple of possessions later on a vicious drive to the rack. Meanwhile, Paul splashed a couple of jump shots to keep the Clippers within shouting distance, until his decisive heroics were necessary. Randy Foye had a big night with 20 points, including a pivotal 3-pointer to vault the Clippers ahead 96-95 inside of a minute before Crawford answered.

The Clippers will close out their homestand on Saturday night against Utah. The turmoil that surrounded the team as they returned home from their miserable road trip has passed, yet some of the underlying issues remain.

The second unit looked awful on Friday night. Kenyon Martin can't find the net with a telescope and his intensity seems to be waning. Nick Young, although acquired for nothing, has brought with him from Washington his itchy trigger finger. If he's not draining 3-pointers, he simply isn't helping the Clippers win games. Del Negro chose to pair Martin with Reggie Evans in the frontcourt to start the second quarter. The result? A 14-2 Portland run in less than four-and-a-half minutes. Blake Griffin continues to struggle defensively and was victimized by Hickson on Friday.

Through it all, the Clippers sit only one game behind the Lakers for the Pacific Division lead. For the first time in several seasons, the Clippers are dealing with high-class problems.