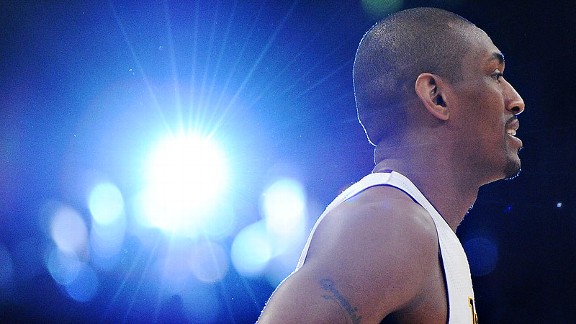 World peace is a real and important thing toward which the former Ron Artest is not working.

When Ron Artest changed his name to Metta World Peace it was in honor of world peace. It was to promote world peace. But, upon review, it was also bad for world peace.

He is, or can be, a stunningly and delightfully sincere dude. No doubt he meant it when he changed his name. I don't doubt he loves world peace and wants to do all he can to promote it. I know all about his violent and angry childhood, and I watched him leave the team party on the podium in 2010, where he was to hoist his first championship trophy, to spend time thanking the psychologist who had helped him navigate to smoother seas in his heart. I know he has given his time and treasure to one good cause after another.

His sin is being only intermittently committed to the cause, and that doesn't work for this cause any more than you can "mostly" stand for, say, monogamy. If you are working for peace, or marriage vows, only some of the time, then you are working against them.

You know that song "You Give Love a Bad Name"? The former Ron Artest gives world peace a bad name.

When I was a sophomore at NYU, I had my heart set on spending a semester in Africa, and I even filled out an application to go to Kenya. But I couldn't bring myself to send it, because another program in the same catalog screamed to me: Tibetan Studies. Who does that? I couldn't even imagine what it would entail. It sounded dangerous and difficult in enchanting ways. One of the smaller challenges was learning passable Tibetan. The program called for a semester studying and living with Tibetan families in exile in the Dalai Lama's adopted hometown of Dharamsala, India, as well as in Kathmandu. The photos suggested -- it was no lie -- that the saffron robes of monks and nuns would surround us every day. At the end of the trip, we'd do something a lot of young Tibetans living in exile never get to do: Visit Tibet. There we'd meet oppressed religious leaders and cross the high plains accompanied by yaks and their herders.

I still have never been to Africa, sadly. But let me tell you: Tibetan Studies was life-changing in all kinds of ways.

Tibet is mostly a high-altitude plain. A lot of India is also flat, but at much lower altitude. Between lie the Himalayas, a mountain range stretching roughly the distance from New York to Colorado.

The Tibetan family I lived with in India had crossed what is by far the biggest mountain range in the world by foot, out of sheer desperation, to escape the horrors of the Chinese invasion. They didn't really want to talk about what they left behind. Other families couldn't escape together, and so made one of the hardest decisions I could imagine, to send their children to cross those mountains, quite possibly to die, at best to have happier lives without their families. It was not hard to find Tibetan children in Dharamsala who had made such crossings, and they could tell you stories of others who died on the journey.

Stuff was, and is, hard. People who send their kids across the Himalayas to get away from something are desperate people. And so numerous were the refugee children that by the time I was there, in 1993, the biggest and busiest school in Dharamsala then, and as far as I know, now, was the Tibetan Children's Village, designed specifically for children without parents.

Even given all that, however, the Dalai Lama, who is the political and religious leader of the Tibetans, took the position that no, we are not going to be violent. Plenty of young Tibetans quietly advocated things from sabotage to terrorism, but they could get no support from their leader.

It remains to be seen how well that'll work out. The Dalai Lama has been in exile since 1959. Tibetans live all over the globe. It's hard to say things have gotten any better in Tibet. And still he wants nothing to do with violence.

But make no mistake. Out there in this world, world peace is a real thing. Nonviolence is a real thing. There are people who are really committed to the cause, and they are not just Tibetan. Martin Luther King, Jr., Gandhi ... you've heard this before.

Even if they didn't make eye contact, it is impossible that Metta World Peace didn't know the Thunder's James Harden was standing there, because they ran into each other first. Only after they were torso-to-torso did World Peace commence the windup, by drawing his left elbow back across his body as far as it could go.

In recent years, NBA players have learned that thrown punches, whether they connect or not, are punished very harshly by referees and the league office. The NBA has done an amazing job of reducing dangerous brawls. Thrown elbows, however, are tougher to police and can look like part of the game, especially in real time. To the extent there's still intentional violence in the game, a disproportionate amount is dispersed with elbows.

An amazing thing about this moment is that neither player was looking. World Peace knew somebody was right there, but his eyes were closed. Harden, meanwhile, was looking past World Peace at the baseline, where the ball was due to be inbounded, unaware that a little spot behind his ear was about to feel the full force of the opposite of peace.

The video shows pure violence. With his arm locked and loaded, World Peace squeezed his eyes shut and unloaded. He's covered in muscles, and this appears to be as hard an elbow as a man can swing. And at the same moment in history that we're learning any blow to the head can cause lifelong brain damage, he rattled a head hard. Harden wheeled over and to the ground where he stayed a long while, and was later declared concussed.

This video will live forever, and forever it will mock the idea that the former Ron Artest is fully committed to world peace.

Later he'd explain that it was "unintentional" and "unfortunate." Harden, allegedly, was the victim of a vigorous celebration, some kind of friendly fire, if you will.

Most importantly: He connected.

In the crazy universe where all that was, as claimed, some kind of mix-up or an accident, he still dropped Harden with massive force, which he would have felt with his own elbow. If you are part of that kind of surprise collision, to a hard skull, no less, you would feel it. If it were a surprise, surely World Peace would have looked to have seen what he hit so hard.

But he didn't. He didn't check to see what happened, nor to see if the dude was OK, because it was no "oops."

That video gives anybody chills. Can you imagine being Rudy Tomjanovich watching that?

There's a difference between admiring world peace, like the old Ron Artest clearly did when he chose to change his name, and standing for it, like the Dalai Lama long has.

Assaulting people on international TV and then making light of what really happened in the aftermath ... that's not a wobble in the cause, that's moving to the other side. People who work for peace are working against World Peace on this one, even though they have sometimes been friends.

Sometimes, "sometimes" is the problem. Marketing world peace isn't like marketing video games or rock music. Getting mentions for "world peace" in the media is not the same as making the world a more peaceful place. Everybody kind of likes peace. Standing for it means sticking with it even when that's a challenge. To be committed except when it gets hard looks a lot like not being committed at all.

And the player sometimes known as Artest has always been a sometimes guy.

Sometimes he plays harder than anybody else in the league. Sometimes he loafs, breaks plays and takes bad shots.

Sometimes he speaks truths few players have the courage to voice. Sometimes he tells incredible whoppers.

And sometimes, this time, he's a disgrace to the name he chose for himself, which happens to be about as serious as a name can be. For all the jokes about peaceniks, lefties, true believers and all that, nobody in their right mind wants to live in violence. If the Dalai Lama can last from 1959 until now without abandoning that commitment, certainly World Peace ought to be able to find his way through a post-dunk celebration on a Sunday afternoon.