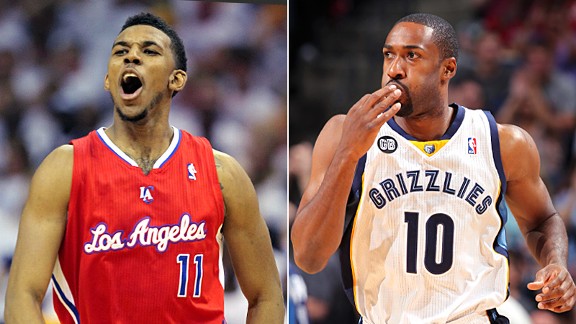 Neither of these guys has a conscience with the ball in his hands. Is this a good thing?

MEMPHIS, Tenn. -- Do you trust a man without a conscience, one who operates on a different -- even nonexistent -- moral code?

For basketball purists, that’s a tough one. We subscribe to the high-minded principles of “quality shot selection,” of “taking what the defense gives you,” of “not settling.” These tenets make up the basketball code we romanticize in “Hoosiers” and in the longevity of the San Antonio Spurs.

But Los Angeles Clippers’ swingman Nick Young doesn’t subscribe to this code -- not by a long shot. When Young has the ball in his hands, he doesn't factor his decision-making the way coaches, fans and analysts would.

"I'd say I have no conscience, to a certain extent," Young says. "I feel like I can make any shot. That's something that's been in me since I started playing the game."

Young doesn't deny that he takes a few ill-advised shots a game, but he won't apologize for them. And on Sunday in the Clippers' improbable comeback, he had nothing to be sorry about. He went for 19 points on 11 shots, including a trio of 3-pointers in a span of a minute to shave a 12-point deficit to three in a flash.

Most of those shots on Sunday were open looks, but for most of his tenure with the Clippers the degree of difficulty on his shot selection has been astronomical.

"Those shots? I still think I can make them," Young said. "Some people might think, 'He's glad to shoot that shot,' but I practice those shots."

This entire premise can offend certain sensibilities. I ask Young, "Really? You practice taking contested 21-footers inside the arc with two guys on you?"

This certitude can drive an empiricist nuts. An average NBA game has about 94 possessions, and if you have a guy like Young chucking up bad shots on three or four of those possessions, that can kill your efficiency. Look at the point differentials of most NBA teams -- a bucket or two per game is the difference between a top-four seed and a seat at the draft lottery.

Despite these truths, is it possible that Young has a point? Are some of those bad shots loss leaders that ultimately pay off in a game like Sunday night's?

In an effort to try to make sense of whether a lack of conscience can translate to success, I go in search of Gilbert Arenas.

After Arenas dropped 61 points against the Los Angeles Lakers in December 2006, Kobe Bryant famously said of the then-Washington Wizards star, "He doesn't seem to have much of a conscience. I really don't think he does. Some of the shots he took tonight, you miss those, and they're just terrible shots. Awful. You make them and they're unbelievable shots."

Setting aside the irony of the source, Bryant gets to the heart of the matter. Many interpreted his comments as a swipe at Arenas, but it wasn't. Bryant was just delving into the mindset of the unconscionable shooter, who is neither good nor bad -- but just is.

On Monday, Arenas had plenty to offer on the matter:

The best players in any sport in the world have no conscience.

It's like an assassin. In any movie, he starts off killing everybody, but then he finds the girl who stops him from being an assassin. That's just like players. The reason Steve Nash can make the passes he can make is because nobody has ever told him when he makes a turnover, "Don't make that pass." Same thing with Rondo. It gives them that freedom to expand and create anything he can think of.

I challenge Arenas on the notion that really bad shots are part of the creative process, that a guy somehow can't be both judicious and aggressive, but he rejected the premise that there's anything wrong with taking a 20-footer with a defender in your face and time on the shot clock:

His creativity lets him do that. It's a shot he thinks he can make. Just like Kobe. If you think about the best players in the world, they have no conscience. They try anything. They do anything. Brett Favre -- he threw any pass he thought he could throw. That's his creativity. That's what he's like. He's going to fail and he's also going to win.

But a guy with a conscience won't pull that trigger.

I ask Arenas whether you can be a great player and still have a conscience.

I counter that Kevin Garnett has a conscience, that he exercises an uncommon discipline and has still been one of the best players of his time.

You're born with it or you're not. Some people are what I call "killers." Some people have the killer mentality and that's who you want with the ball at the end of the game. You want them taking that shot because they don't care about failing -- even if it's a bad shot.

It's hard to let Arenas off the hook on this point. Does he deny there are bad shots that cost you basketball games?

That's the game of basketball. You can't go around and play like we did yesterday -- like college basketball when you're up 20 with a few minutes left and you're stalling and you do the four corners, and before you know it, you stop being aggressive.

So the Grizzlies developed a conscience at the wrong time in Game 1?

Arenas' theory that conscience is a congenital trait is interesting. In his worldview, a player can't develop -- or rather shed -- his conscience. He's either hard-wired to kill, like Nick Young or, on a larger scale, Kobe Bryant. Or he's not.

A lack of conscience might be a necessary ingredient for Arenas' "killers," but those moral vacuums aren't created equally.

On Sunday, we saw the best of Young's nihilism. Without it, the Grizzlies are up 1-0 in this series. But down the road, it's possible a lack of conscience might shoot the Clippers out of a game.

Such is the fickle nature of the code.