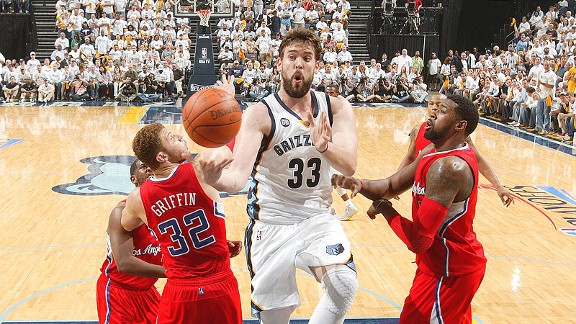 When Marc Gasol gets the ball in the middle of the floor, he's a terror.

MEMPHIS, Tenn. -- Any team that blows a 27-point, second-half lead will assume the role of league punching bag until it suits up for their next game, and the Grizzlies have absorbed plenty of hits over the past 48 hours.

The early stages of Game 1 seem like an afterthought now, but if you're the Grizzlies (or the Clippers), a screening of Memphis' first-quarter reveals a team that got anything and everything it wanted in the half court on Sunday night. And most of those play calls were focused around one man -- Marc Gasol.

The Grizzlies aren't a very efficient offensive team in the half court. They have trouble spreading the floor because none of their starters drains more than one 3-pointer a game (Mike Conley's prolific, outlying Game 1 explosion notwithstanding), and there isn't a single player on the roster who hits at better than a 38 percent clip from beyond the arc. Their big men provide a little stretch -- and that can create pockets of space -- but they can't fully stretch a defense.

The Grizzlies staff understands those deficiencies better than anyone. They've designed a half-court offense whose best sets force the defense into impossible choices by putting the ball into the hands of their most skilled practitioner, Gasol.

Here's my favorite Grizzlies set, one they used to jump out early on the Clippers in Game 1.

Please look at the pair of smaller panels on the left side of the frame. The possession begins with an angle pick-and-roll with Zach Randolph screening for Conley, the Grizzlies' point guard. Conley then dribbles right of the pick. As Gasol flashes to the middle, Conley hits him with a pass (It's worth noting that, in the third quarter, the Clippers ran so far under this action, that Conley chose to use all that space to launch 3-pointers at will). 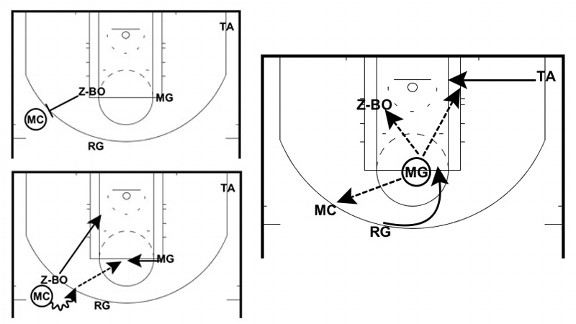 Options, options for the Grizzlies when Marc Gasol has the ball in the middle of the floor.

Now we're at the main event, which you can see in the larger panel on the right side of the frame. This is where all the good stuff happens for Memphis.

Know what's impressive about this set? Once the ball goes into Gasol at the foul line, all five guys on the floor are viable scoring options. If Gasol has space, he has a clean turnaround jumper (3rd quarter, 10:15). Rudy Gay can slice, picking up a handoff from Gasol, and rubbing his defender off the big center in the process. Now Gay is on the move with the ball with separation from his defender. He can drive or, if he prefers, he can stop and pop (1st quarter, 11:00). If the defense helps off of Tony Allen in the right corner, Allen goes back door with an aggressive baseline cut to the basket, where Gasol hits him with a pass (1st quarter, 10:07). We've seen beautiful high-low passes from Gasol to Randolph, and if Conley is left alone on the perimeter, Gasol can kick the ball back out to him.

You'll also see the Grizzlies run this with different combinations of big men. Marreese Speights doesn't have the full toolbox Gasol has, but if he flashes to the foul line unaccounted for, the Memphis ball handler can hit him there for an easy face-up jumper. We saw this toward the end of the first period, a bucket that gave the Grizzlies a 34-16 lead.

"We got away from it," Gasol said. "We took too many good shots and we turned the ball over. That was our fault. [The Clippers] also did a better job of showing. So we stopped running it or I'd set the pick."

Which is one way you blow a 27-point lead.

In fairness, the Clippers made an adjustment. Their harder shows, as Gasol alluded to, made the pass from Conley to Gasol harder to thread. The Clippers also stopped helping off Allen, which slammed the back door shut and opted to lay off Gay, who can't do as much harm from distance. If instead of going into Gasol where he's so dangerous, Conley decided to shuttle the ball to his right with Gay at the top of the floor one-on-one, the Clippers can live with that. Most of all, Reggie Evans and Blake Griffin brutalized Gasol at that spot, not only denying the pass, but pushing Gasol farther out on the floor.

The Grizzlies will inevitably make a counter-adjustment. They're unlikely to shoot 69 percent from 3-point range again, and will need to manufacture quality possessions by leveraging Gasol's capacity to make good things happen from his preferred spot.