As has been mentioned once before on TrueHoop, Jeffrey Ma of ProTrade -- who works closely with Kevin Pritchard of the Blazers, who used to work for the Spurs -- once emailed me this sentence about San Antonio's philosophy:

I remember sitting with Kevin Pritchard before he was KP, the GM of the Trail Blazers, and he explained the Spurs' mantra to me: Get three superstars and then fill the roster with guys willing to go through a wall to win.

For the Spurs, you can really see this philosophy in action. I mean look at their salaries. Tim Duncan, Tony Parker, and Manu Ginobili are the only ones who really get paid large amounts or for many years. The other pieces -- sorry Bruce Bowen -- are priced to move.

The team has been excellent pretty much throughout the Duncan era, but has always given long minutes to players with below average contracts. Today's Francisco Elson, Ime Udoka, Michael Finley, and Darius Washington are yesterday's Stephen Jackson, Devin Brown, Avery Johnson, and Mario Elie. The list is long.

And the message seems to kind of be that if you have three stars, anchoring everything, there are a lot of different guys -- affordable guys, even -- who might be capable of filling in around them. It is a basketball solution rolled into an all-important salary cap solution.

(I would argue that this San Antonio team would be tremendously hurt by the absence of a fourth player -- Bruce Bowen -- but let's not get too far from the main story.) 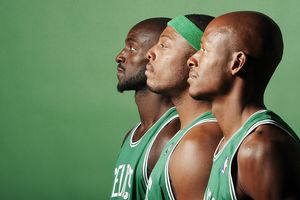 For whatever reason, the Spurs "Big Three" approach has been something that I have been thinking about a lot, ever since I heard it.

I talked to ESPN's David Thorpe about it, and he said most people think it takes three stars to win an NBA title, for whatever reason. He also says that he likes those three to be two guards and one big man.

Beyond that, he thinks it makes all the sense in the world to seek out not the most talented or biggest players available, but those most willing to contribute in a supporting role. They need not be expensive.

For instance, lots of people think Luis Scola is a more talented player than some of the other players on San Antonio's roster. But Scola is not really built to be happy scrapping all night like Fabricio Oberto, and eventually he would have needed some real money. Yet he's also not really ready to be one of San Antonio's superstars. So they shipped him to Houston.

"In the bigger picture, I think some self-imposed fiscal discipline makes sense," adds Thorpe. "Do you really think companies like Microsoft and Cisco run out and buy stuff just because they can afford it? No! They execute a strategy."

Then look what Boston did!

If ever anyone put a "Big Three" philosophy into effect, it was Danny Ainge. Boston's supporting cast is weaker than the supporting cast they had last year. But they have three big stars out there, and so far they're going like gangbusters.

Makes me wonder: are other teams on board with this "Big Three" philosophy?

Looking around the league, here are some candidates: