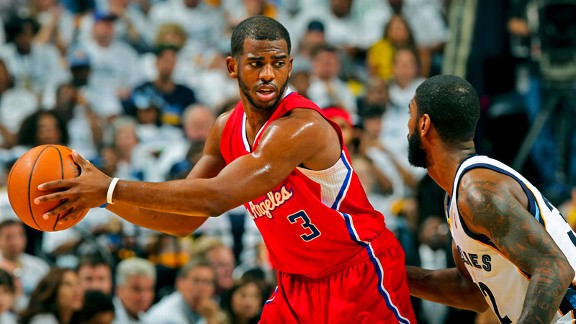 Chris Paul tries to maintain control against the Grizzlies.

There was plenty of time to come. Down seven points with seven minutes left? That’s a lifetime for Chris Paul, who radiated a white-hot focus as crunch time approached.

Watching the game, you just knew the Clippers would make a push. After all, Paul has proven time and again that he is a basketball magician. As recently as Game 1, he needed only eight minutes to mastermind the disappearance of a 24-point deficit.

So just as he had in Game 1, Paul the magician waved his hand around his top hat, but this time nothing appeared. Try as he might, Paul simply couldn’t conjure the plays, much less the momentum, necessary to overtake Memphis.

The Clippers never got closer than seven points, and Paul watched as the Grizzlies made one play after another.

As the game escaped his grasp, you could see Chris Paul's determined brain -- of the most powerful tools in the NBA -- work into an intensity that bordered on rage.

With 1:47 left, one of Paul’s patented eight-foot fadeaways danced on the rim and fell off.

On the other end, he applied a violent half-nelson on Marc Gasol to prevent the giant from cutting to the rim.

Next he chased Mike Conley backward and used his chest to bully him to the ground, forcing Conley to cry “Uncle!” though it sounded more like “timeout!”

As Conley lay on the floor frantically pleading for time, Paul clawed the ball free, a moment too late.

Finally, when the game was clearly out of reach, he plowed into Conley on the left sideline, lowering his shoulder to dislodge the ball as he ran through the play. Seemingly relieved to at least levy a hard foul if he couldn't get the steal, Paul walked back and helped Conley to his feet.

Despite his best, genuine efforts, Chris Paul was running up against the limits of his ability to control the game, or at least this game. Even Paul, as great as he is and as hard as he tries, couldn’t wrangle Game 2 into the one he wanted it to be.

The Grizzlies are a team that thrives on chaos. They revel in the scrum, and are committed to elbowing, bumping and shoving the Clippers' best player every chance they get.

It’s an enthralling contrast to Paul, who doesn't shy from contact but is also obsessed with order, with his ability to control every aspect of the game -- the ball, opponents, teammates, referees, coaches -- he works every angle.

It’s also a fantastic challenge. Superheroes are most compelling when their opponent presents not just an existential threat (life or death) but a philosophical one -- think of the Joker’s destructive nihilism vs. Batman’s strict moral code in The Dark Knight.

The last two minutes of Game 2 were Batman pounding on the Joker in the Gotham jail cell, finally pushed beyond his ability to hold back, the Joker giggling manically in his face.

Last night it was the Grizzlies who claimed the last laugh. And we learned that even Chris Paul doing everything right is sometimes not enough to control the chaos.