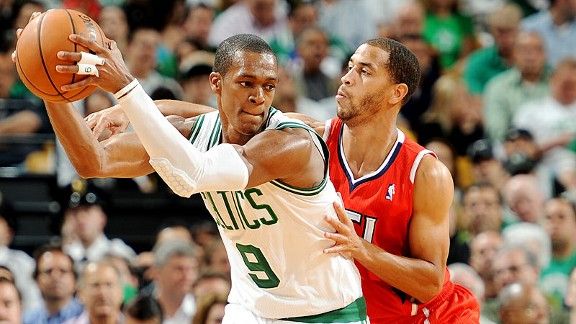 Rajon Rondo’s triple-double helped the Celtics take a 2-1 series lead over the Hawks.Rajon Rondo made plenty of history in the Boston Celtics’ 90-84 overtime win over the Atlanta Hawks.

Rondo became the first player in NBA history with at least 17 points, 14 rebounds, 12 assists and four steals in a playoff game, according to the Elias Sports Bureau.

Elias also tells us he’s the first player in NBA history to record a triple-double in a playoff game after missing his team’s previous game.

Rondo triple-doubles equal Celtics wins. In Rondo’s 20 career triple-doubles (13 in the regular season, seven in the playoffs), the Celtics have a 19-1 record. The lone loss came to the Chicago Bulls in the first round in 2009.

Most Triple-Doubles Since 2008-09
Regular Season and Playoffs

Including the regular season and playoffs, nobody has more triple-doubles than Rajon Rondo (20) since the start of the 2008-09 season.

Rondo’s seven career playoff triple-doubles are tied with LeBron James for the second-most among active players, trailing only Jason Kidd’s 11.

Only five players in NBA history have more than Rondo's seven career playoff triple-doubles. Magic Johnson (30) is the all-time leader in that category.

Rondo has etched his name in playoff lore by joining an elite list of NBA all-time greats.

OTHER CELTICS NOTES FROM GAME 3

• Paul Pierce was 14-of-14 on free throw attempts. Only three times in the past 20 seasons has a Celtic made all of his free throws with at least 14 attempts, and it was Pierce each of those three times.

• Ray Allen came off the bench for the first time in a playoff game. He had started his first 110 career playoff games.