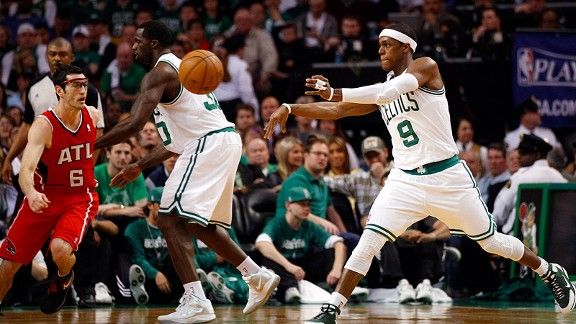 Rajon Rondo (right) has double-digit assists in each of his last three playoff games.Rajon Rondo is making it clear how important point guard play is in the NBA playoffs.

Rondo is the first player with at least 20 points and 16 assists with no more than one turnover in a playoff game since Tim Hardaway for the Golden State Warriors in 1991, who had 27 points, 20 assists and one turnover against the Los Angeles Lakers in Game 5 of the Western Conference Semifinals. Rondo, Hardaway and Magic Johnson are the only players to accomplish this feat in the last 25 years.

In the last 25 seasons, a Boston Celtics player has had at least 16 assists in a playoff game eight times. Rondo has seven of those performances (Larry Bird had the other in 1990).

Rondo consistently gets it done in the playoffs. Among players in NBA history with fewer than three turnovers per game, only John Stockton (10.1) averages more assists per game than Rondo (8.6).

With Rondo on the court in the playoffs, the Celtics are 14 points better per 100 possessions than they are when Rondo is off the court.

A popular definition of a great point guard is one who makes his teammates better. There’s no better example of that in the playoffs than Rondo with Kevin Garnett. When Rondo is on the court in this series, Garnett is averaging eight more points per 48 minutes and shooting 25 percent better from the field.

Garnett, Avery Bradley and Brandon Bass are all scoring more, shooting better and have a better plus-minus when Rondo is on the court.

How important is a reliable point guard in the playoffs? Just ask the Bulls, who lost Derrick Rose to a torn ACL and went from an NBA title favorite to a First Round underdog.

Or how about the New York Knicks, who were outscored by a combined 60 points in their first three games against the Miami Heat before barely staying alive in Game 4?

Certainly, injuries to Jeremy Lin and Iman Shumpert have hurt the Knicks at point guard. No team has fewer assists (12.5) or more turnovers (19.5) per game in the playoffs than the Knicks. Their starting point guard, Baron Davis, who exited Game 4 with a dislocated patella, has 13 assists and 13 turnovers in the series. Every single other playoff team has at least one player with more assists per game in the playoffs than Davis, who leads the Knicks.

Still not sure how important strong point guard play is in the playoffs? Over the last three seasons, point guards with at least 12 assists are 19-6 in playoff games.