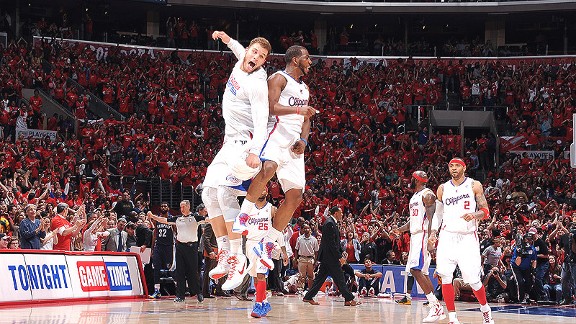 Chris Paul is leading the Clippers to new heights.

We had the feeling there would be plenty of Flop of the Night fodder in the playoffs. But we never dreamed that anyone would approach Chris Paul's performance in Game 4.

In what must surely be the most impressive and ambitious flop in the history of the NBA, during a dead ball situation, Chris Paul flopped on a ref!

After Memphis called timeout, official Mike Callahan moved to get between Paul and Memphis forward Dante Cunningham, who were having a little passive-aggressive dispute over who got to hand the ball to the official. Paul knocked the ball out of Cunningham’s hands, and as Paul went to secure it, Cunningham flicked the ball away with his foot.

Paul’s head whip was enough to convince Callahan that the situation was escalating, and he called a double technical foul on Paul and Cunningham.

So to recap: It’s a dead ball. Chris Paul flops when a referee touches him. The referee calls a double technical foul.

Paul’s control over a basketball game is truly complete.

Meanwhile, on Twitter, the Clippers were cementing a floppy reputation.

[View the story "Storming the gates of Flop City" on Storify]