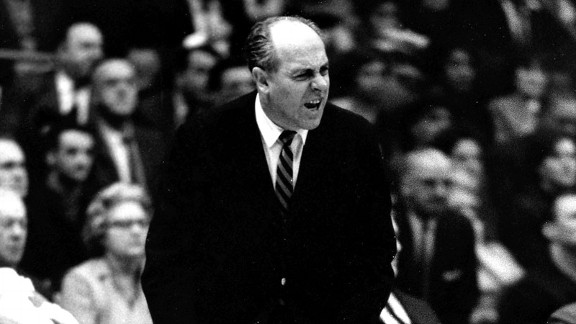 The leader of the Celtics implored players to stay on their feet.

In the mid 1970s, legendary Celtics coach and team president Red Auerbach gathered several NBA stars, and a veteran of refereeing, to make a video. The goal? To end flopping.

That's right, nearly four decades ago, Auerbach was the Pied Piper of what has become the Stop the Flop movement, as you can see on video.

"Coaches today in high school, college and pro, are teaching the players how to fall! This is unreal!"

The Auerbach in this video is not a man who minds jabbing a finger at the camera to make a point.

Auerbach leads players like Wes Unseld and Mike Riordan through flopping scenarios. After Riordan hits the deck, Auerbach quizzes him. "Did Wes Unseld hit that man hard enough to knock him down? What went through your mind, Mike? What was your purpose when making that pick?"

Riordan says that initially he was "trying to free my teammate Elvin Hayes here for a jumpshot or a move to the hoop without the ball. But also, if I could get away with it, to draw a foul on Wes in setting that pick. To fake a foul, in other words. That was the second purpose."

Auerbach brings Hall of Fame referee Mendy Rudolph into the conversation. Rudolph jokes about how "Mike went and did some 'Hollywood acting." Rudolph's advice: Don't call a thing.

Auerbach directs another scenario, with another flop. Rudolph says "it was a great acting job by Clem Haskins. Now the contact between Mike and Clem was totally incidental, and again the officials should ignore it completely to eliminate this kind of acting in our game."

Then Rudolph adds another option for officials: "If they’re smart, again, to stop it, to stop it early in the game: Call a blocking foul on this man right here, and he’ll stop falling on the floor picking up splinters on his backside.”

"Well I happen to agree with you," says Auerbach. "I am very, very much opposed to this kind of basketball.”

"We’ve got to stop this sort of play in the NBA," replies Rudolph.

Auerbach closes the video by turning to the camera and addressing viewers:

What are we going to do about it?

Let’s clean this thing up!

Let’s not hurt the game.