How the San Antonio Spurs got tagged as boring never made much sense to me.

Yes, the Spurs were the proctors who broke up the spring flings thrown by the Seven Seconds of Less Phoenix Suns. For those who like their superstars to dazzle, Tim Duncan's charisma deficit and his mechanical game can be affronts. The Spurs have historically been defensive stalwarts, likelier to grind an opponent into submission, not run it off the court. Those qualities, along with a lack of interpersonal drama, might lull certain fans to sleep.

But boredom, at its very root, can be defined as the absence of choice. Get stuck with a program that uses the same formula to produce the same outcome over and over and over again, and you get bored. If you eat the same stuff every day for lunch, you grow tired of it. The same outings with the same people where you talk about the same stuff -- those experiences can become rote.

We're rarely bored when our expectations are challenged, and the most interesting way to do that is by introducing choice into the equation. Anything can happen means that the range of possibilities is endless.

When the Spurs bring the ball upcourt, that's usually the case. They relied on isolation plays only 7.1 percent of the time in the regular season. (Only the Magic used a smaller percentage of their possessions in iso.) In their first-round sweep of Utah, the Spurs ran isos only 24 times in four games. (The Knicks, in contrast, had 124 such possessions over five games.) Instead, the Spurs did what they usually do to get what they want in the half court -- rely on motion, timing, ball movement and, most of all, choice.

Choice is the overriding principle at work in an efficient offense. Take away that offense's primary objective in a half-court possession, and it will gladly move on to option No. 2. Sniff out No. 2, and a third choice will materialize. And so on.

The Spurs under Gregg Popovich have always understood that NBA defenses are too big and quick to confine your offense to one option. There have to be multiple contingency plans in a given possession; otherwise, you leave yourself vulnerable to chance. A lot of fans like the element of chance in sports -- and perhaps that's one explanation for the Spurs' "boring" rap.

But the Spurs' trademark set -- called "motion weak" -- is anything but boring. It's a magical merry-go-round of basketball possibility, a play that has an endless number of outcomes. When it begins, the players aren't even sure where the ball will land, but they know that if they read the defense and move with precision, a quality look at the basket will surface from somewhere. 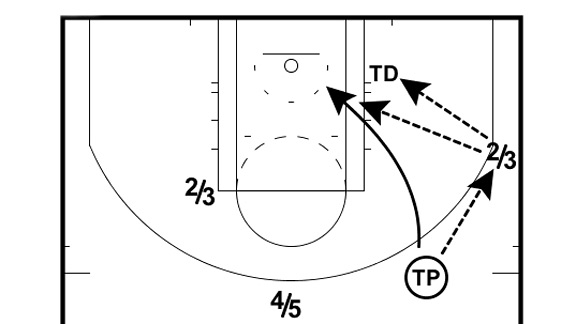 The play starts simply enough: Tony Parker passes the ball off to a wing player on his right. It might be Danny Green, Manu Ginobili, Kawhi Leonard, Stephen Jackson or Gary Neal. Once the ball leaves Parker's hands, he cuts through to the basket.

If the defense is napping or Duncan has prime position against his defender down on the low right block, the ball can go immediately from the wing to Parker on the move (it'll look like a simple give-and-go) or Duncan for a quick shot. Against bad defenses in January, the Spurs will pick up a couple of easy buckets this way, but deep into the postseason, the Spurs usually will have to put in a little more work. 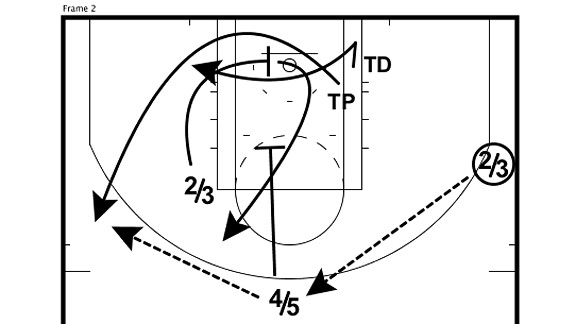 Very true, so let's break down what each of our chess pieces is doing on the board:

When this cycle of events is over, the ball is back in Parker's hands on the other side of the floor. Duncan may or may not have a mismatch on the left block, depending on how the defense dealt with that cross screen. 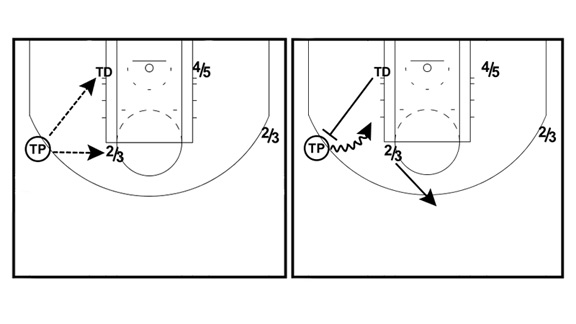 The carousel has slowed down a bit, and Parker has a few options:

The responsibility now lies with Parker and Duncan to make the call. If Duncan moves off the block to set a ball screen for Parker, we move on ... 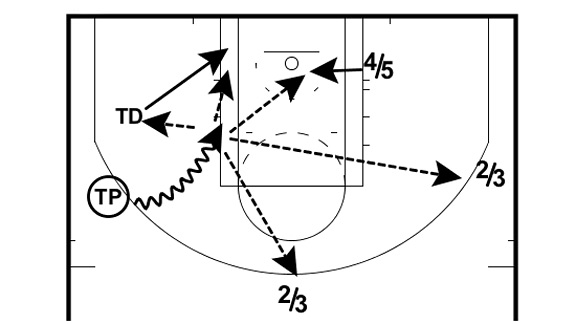 The final resort of the Spurs' signature set looks like the first strike from most teams -- a simple angle pick-and-roll on the left side with a variety of drive-and-dish options for Parker. He can deliver a bounce pass to Duncan on the move (or a quick dish if Duncan pops, which is increasingly the case these days). Otherwise, Parker can hit the other big man on a duck-in beneath the weakside glass or kick the ball out to either of his wings on the perimeter.

Parker recorded a career-high 28.4 assist rate this season, far and away the best mark of his career. How did he do that at age 29? By become fluent in situations like these. It takes years to master an intricate offense, even for the most instinctive players. There's a reason we see veteran teams executing best in the playoffs. It's because this stuff is tricky! Running a sophisticated offense requires tens of thousands of possessions in repetition over several seasons with the same guys.

There was a time when Parker couldn't see or wouldn't respond to all the options in the Spurs' offense. He didn't arrive in the league with the vision of Chris Paul or Steve Nash. It took several seasons and some tough love from Popovich, but Parker has arrived in full.

And that's how you build the league's No. 1 offense.

Information in this post was provided by mySynergy Sports.com.