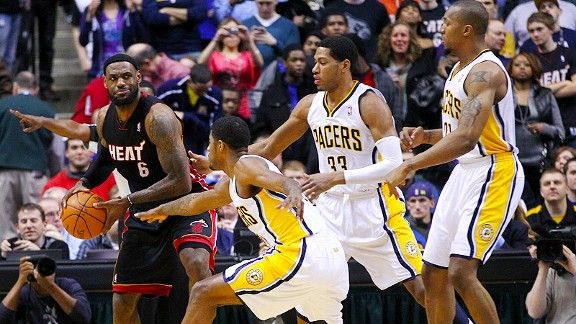 The Pacers starting five has given LeBron James and the Heat fits in the first three games.The longer the Indiana Pacers can keep their starting five on the court, the better chance they have to eliminate the Miami Heat in the Eastern Conference semifinals.

In eight postseason games, Indiana's starting five has outscored its opponents by 79 points and outrebounded them by 68.

During the regular season, George, Granger, Hibbert, Hill and West started just eight games together, and the Pacers were 7-1 in those games. They played just 229 minutes together and outscored their opponents by 72 points.

In the playoffs, they’ve already played together for 176 minutes, and the formula continues to be successful.

• Has more than double the second-chance points (70) of any other five-man lineup. (Second are the Lakers and Magic with 30.)

When George, Granger, Hibbert, Hill and West were on the court in Game 3, they outscored the Heat 68-40.

Every other Pacers lineup was outscored by nine.

Since the 2008 playoffs, only four lineups have finished with a plus-minus that’s been as good as Indiana’s +79. Three of those teams reached the NBA Finals and two won the NBA championship, including the Mavericks’ lineup last year of Tyson Chandler, Jason Kidd, Shawn Marion, Dirk Nowitzki and Jason Terry.