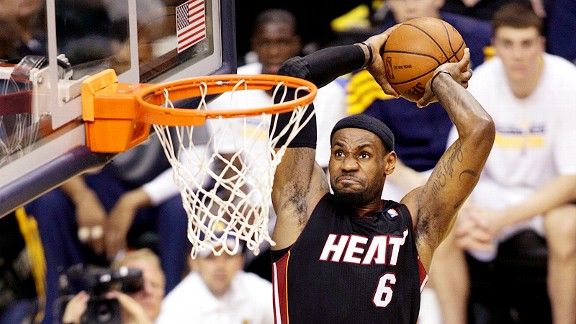 LeBron James led the Heat with 40 points, 18 rebounds and 9 assists Sunday.There have been more than 3,000 postseason games in NBA history, but only once has a player scored 40 points, grabbed 18 rebounds, and recorded 9 assists in a game. At least until Sunday.

The Elias Sports Bureau tells us LeBron James joined Elgin Baylor as the only players in postseason history to register 40 points, 18 rebounds and 9 assists in a game as the Miami Heat evened their series with the Indiana Pacers at two games apiece. Baylor posted his 40-18-9 game in a Los Angeles Lakers win over the Detroit Pistons in Game 1 of the 1961 Western Division Semifinals.

Betweens points scored and assists, James had a role in 62 of the Heat’s 101 points Sunday. That’s the highest such percentage (61.4) for James in any game this season.

But Miami’s performance was far from a one-man show, as Dwyane Wade scored 30 points one game after being held to five points on two-for-13 shooting. James and Wade became just the fifth set of teammates to have a 40-point game and 30-point game in a road playoff win in the last 20 years.

After trailing by eight at halftime, James and Wade combined to outscore the Pacers 43-39 over the final two quarters. And after much was made of the Pacers rebounding edge in Game 3, it’s worth noting that James and Wade also had more rebounds than Indiana in the second half in Game 4 (19-18).

The Heat’s big two were dominant at the rim, outscoring the entire Pacers team on shots inside of five feet (32-26). Wade made six of his seven shots inside five feet after attempting a season-low one shot from that distance in Game 3.

Indiana’s eight-point lead through two quarters was the largest blown halftime lead for the Pacers this season. They fell to 15-1 when leading by eight or more entering the second half in 2011-12.

The two teams will meet in the all-important Game 5 Tuesday night in Miami. In NBA history, teams to win Game 5 of a series tied at two go on to win the series 83 percent of the time.