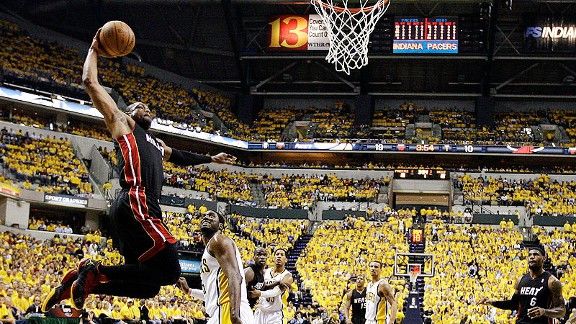 Dwyane Wade scored a game-high 41 points to lead the Heat to a win in Game 6.

For the Miami Heat, it’s not how they start, but how they finish. After the Heat fell behind 2-1 in the series, Miami used dominant third quarters to win Games 4, 5 and 6 against the Indiana Pacers in the Eastern Conference Semifinals.

With the win, the Heat advance to the Eastern Conference Finals for the second straight season and fifth time overall. The only other time they made it this far in the playoffs in consecutive seasons was in the 2005 and 2006 playoffs. The Heat’s only NBA title came in that 2006 postseason.

Miami’s clinching win was hardly surprising as the Heat improve to 5-2 in franchise history when leading a series 3-2 and haven’t lost since the 2005 Eastern Conference Finals against the Pistons. The Heat are now 6-0 this postseason and 3-0 in this series when scoring at least 100 points .

The Pacers, on the other hand, have never won a postseason series after trailing 3-2, dropping to 0-9 all-time after tonight’s 105-93 loss. The only other franchise that has lost as many as nine series without winning one in that situation is the Bulls (0-11), according to the Elias Sports Bureau.

Keys to the Game

Pacers Offense by Half in Game 6

It was a different story in the second half, as the Heat outscored the Pacers 22-12 in the paint after halftime, with their depleted starting frontcourt outscoring their Pacers counterparts 19-16.

The Heat’s pressure defense also was a difference-maker in their second half comeback, as the Heat forced 10 Pacers turnovers and scored 17 points off those turnovers after halftime.

Dwyane Wade was the offensive spark in Game 6, scoring a team-high 41 points for his seventh career 40-point playoff game, which is tied for third-most among active players. The Heat are now 7-0 when Wade scores 40-plus points in the playoffs.

Wade continued his strong play on the interior, going 8-of-11 (73 percent) on shots inside 10 feet. But his biggest improvement in Game 6 came from outside, as he connected on a season-best nine field goals from 10 feet and beyond, and shot 64 percent from that distance.

LeBron James added 28 points in the victory, matching his career average of 28.3 points per game in potential series clinchers. That mark is the fourth-highest all-time, according to Elias, trailing only Michael Jordan, Elgin Baylor, and Jerry West (min. 15 games).