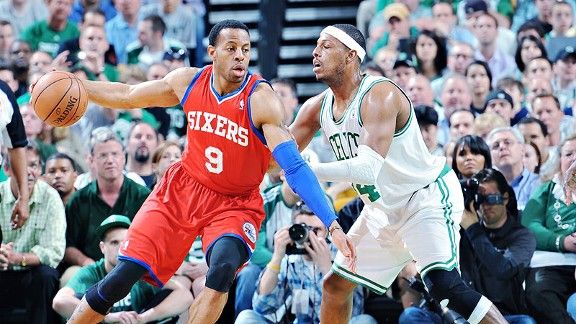 The Celtics and 76ers meet in a winner-take-all Game 7 in Boston on Saturday night.

The Philadelphia 76ers and Boston Celtics continue their storied playoff rivalry as they meet Saturday night (ABC, 8 ET) in Boston for the seventh all-time Game 7 between these franchises.

The Celtics own a 4-2 advantage in the previous six matchups, but the 76ers won the most recent game three decades ago in the 1982 Eastern Conference Finals.

History appears to be on the Celtics’ side as they are 17-4 all-time at home in Game 7s. They did lose their last such game in 2009 against the Orlando Magic, but they have never lost consecutive Game 7s at home. The Celtics are also 20-7 overall in Game 7s, the most such wins and second-best record in NBA history (min. five games).

The 76ers, on the other hand, are just 1-7 all-time on the road in Game 7s and haven’t played one since 1986. The franchise is 6-8 overall in Game 7s; the eight losses are tied for the most in NBA history.

Celtics Keys to the Game

The Celtics have yet to lose back-to-back games this postseason, having won all four contests following a loss. However, the Celts have not fared well trying to close out a series since the "Big 3" was formed entering the 2007-08 season. They are 10-13 in potential series clinchers (1-2 this postseason).

Kevin Garnett’s jump-shooting has kept the Celtics in this series. Garnett has made 26-of-55 (47 percent) jump shots from 15 feet and beyond. The rest of the Celtics have combined to shoot 30 percent from that distance this series.

The absence of Avery Bradley, who underwent season-ending shoulder surgery on Friday, is significant for the Celtics, as it takes away their best five-man lineup this postseason.

76ers Keys to the Game

Philadelphia is looking to advance to the Eastern Conference Finals for the first time since 2001 and is trying to become the first No. 8 seed to reach the conference finals since the Knicks in the lockout-shortened 1999 season.

However, they will need to overcome history in order to make it to the next round.

The 76ers have lost each of the last 13 best-of-seven series in which they have trailed 3-2. According to the Elias Sports Bureau, that is the longest such streak in NBA history.

Offense has been an issue in the playoffs for the 76ers, who are scoring 86.6 points per game, the fewest among remaining teams. The 76ers haven’t scored more than 92 points in their last 10 games, the longest single postseason streak of its kind since the Pistons in 2006 (11 games).