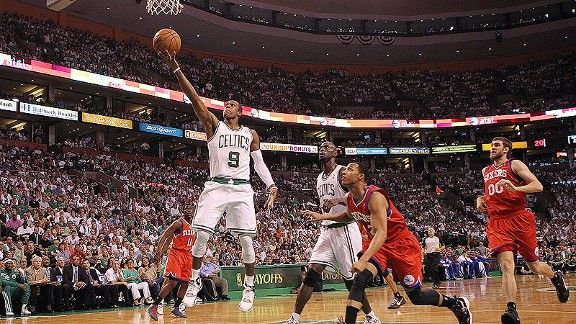 Rajon Rondo recorded his ninth career triple-double as the Celtics beat the 76ers in Game 7.The Boston Celtics showed that history and experience does matter when it comes to a winner-take-all Game 7, defeating the Philadelphia 76ers 85-75 to earn their third trip to the Eastern Conference Finals in the last five seasons.

The Celtics improved 21-7 all-time in Game 7s, the most such wins in NBA history. Entering the game, the players on Boston’s roster had a combined 27 games and 925 minutes of experience in Game 7s, compared to just three games and 59 minutes for the 76ers.

The 76ers dropped to 6-9 all-time in Game 7s, the most such losses in NBA history. Philadelphia has now lost each of the last 14 best-of-seven series its has played in which it trailed 3-2. That is the longest such streak in NBA history, according to the Elias Sports Bureau.

Rajon Rondo was a non-factor through the first three quarters, scoring just seven points on 3-of-9 shooting, as the Celtics built a slim three-point lead. But he exploded in the fourth quarter, finishing with 18 points, 10 rebounds and 10 assists for his ninth career triple-double.

He scored all 11 of his fourth-quarter points after Paul Pierce fouled out with 4:16 remaining, personally outscoring (11-7) and outrebounding (3-1) the 76ers during that stretch.

His nine career playoff triple-doubles are tied with Wilt Chamberlain for the fourth-most in NBA history, behind only Magic Johnson (30), Jason Kidd (11), and Larry Bird (10). Rondo also joined Larry Bird as the only Celtics players to record a triple-double in a Game 7.

However, on top of recording a triple-double, Rajon Rondo had seven turnovers tonight. According to Elias, this is the first time a player on the winning side of a Game 7 committed at least seven turnovers.

Celtics Keys to the Game

In the first half, the Celtics used a strong running game to take a eight-point halftime lead. The Celtics outscored the 76ers 15-4 in transition in the first half, hitting 5-of-10 shots on the break compared to just 10-of-30 attempts in their half-court offense.

The Celtics took control of the game in the fourth quarter as they finally found their shooting touch from the perimeter.

Boston missed its first 14 shots from beyond the arc before Ray Allen hit a three-pointer with 9:51 remaining in the game, and ended up making its final three three-point attempts.

The Celtics defense also proved to be a difference-maker in Game 7, as it held the 76ers to just 66 points and 35 percent shooting on 92 plays in the half-court. The Celtics' half-court defense ranks first in points per game (68.5) and points per play (0.79), and second in field goal percentage allowed this postseason.

The Celtics will face the Miami Heat in Game 1 of the Eastern Conference Finals on Monday night. The Celtics won three of the four matchups in the regular season, outscoring the Heat by nearly eight points per game while shooting better than 50 percent from the floor in those contests.

However, Mario Chalmers is the only one of the projected Game 1 starters to have started in all four games. In their final regular-season meeting, LeBron James, Dwyane Wade, Chris Bosh, Rondo, Kevin Garnett and Allen each did not play.