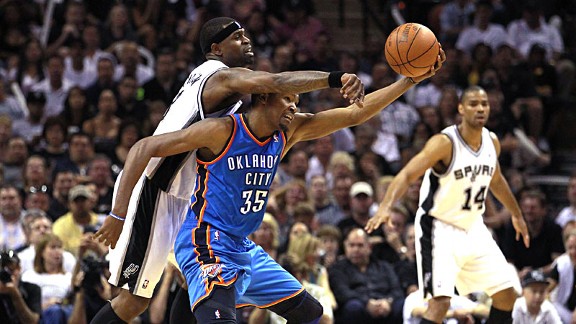 Wired coaches are a nice little frill of the modern-day NBA telecast, but the segment often produces a flurry of well-worn clichés and platitudes. But every once in a while a huddle sound-byte will transmit the essence of a team, its coach and its guiding principles.

"Are we having fun yet?" Gregg Popovich asked the team as they trailed by nine. He raised his voice enough to be heard over "Sweet Caroline," but no more loudly than he needed to. "I need a little bit more dose of nasty. I'm seeing a little bit of unconfident, a little hesitation. It's not supposed to be easy. Every round gets tougher. … Penetrate hard, good passes, shoot with confidence. I want some nasty."

Popovich expressed himself with pure calm. This was one adult speaking to other adults, and the tone was as moderate and measured as anything we'd hear at a random office meeting. Five minutes later, the Spurs took a lead they wouldn't relinquish.

The Spurs didn't win the game because their coach projected reassurance and confidence to them during a dead ball. They went out and made plays, protected the ball and attached themselves to Kevin Durant's right shoulder. But the message sounded like an official declaration of the Spurs' teamhood.

Only two teams in the NBA this season were more protective of the basketball than the Spurs, but they ran up 14 turnovers in a very jittery first half. It's hard to fault the Spurs for wanting to get into possessions quickly, and the strategy produced some solid offensive results. In the first four minutes, an early drag screen by Tim Duncan for Tony Parker got Boris Diaw an easy bucket cutting to the hoop off Tony Parker's penetration. A minute later, the identical sequence ended with a wide open face-up jumper for Duncan when the entire Thunder defense sank to Diaw. Upon their arrival, Diaw kicked a pass out to Duncan at 17 feet.

This emphasis on speed didn’t come without a cost, and there were times when the Spurs' lead foot worked to their detriment. San Antonio has the ability to find shots for itself in the half-court, so why come to a track meet against a quicker team without an invitation? It's smart for the Spurs to challenge the Thunder's defensive preparedness by attacking with an action five seconds into the shot clock, but to run yourself ragged and throw the ball around the gym and dribble into gridlock traffic for the sake of being early doesn't make a lot of sense.

San Antonio found an equilibrium in the fourth quarter. At the 5:15 mark off a Thunder miss, Parker and Duncan got into a pick-and-repick about seven seconds into the shot clock, but there was a lot more order on the court. Manu Ginobili, Gary Neal and Stephen Jackson draped themselves perfectly across the arc. Once Parker found his seam and Russell Westbrook collapsed, Parker dished to Neal for the 3-pointer.

The deeper into the fourth quarter the game progressed, the more control San Antonio exerted on the pace of the game. A minute after the early pick-and-roll, Parker and Duncan tried a slip-and-pop at the top of the floor. Ibaka handled the action well, so Duncan turned to his right to hand the ball off to a sweeping Ginobili. Thabo Sefolosha fought over Duncan, but Kendrick Perkins -- not his finest outing -- dropped into the lane, leaving Duncan a straight line to the rim. Ginobili fired a bounce pass between two defenders that found Duncan, who walked in for an uncontested layup.

There was tempo here, but also patience. San Antonio doesn't need to aim for 88 possessions, nor should it fear a game played at snappy pace. But the Spurs should be aware that when it's time for the respective teams to roll out their half-court compulsories for the judges, they have a decisive advantage.

It's also helpful when your opponent's best big defender and best perimeter defender play a collective three minutes in the fourth quarter while you score 39 points.

Durant didn't have a terrible night (had one of his four 3-point attempts fallen, he would've recorded just the seventh 30-and-10 game of the postseason), but was clearly frustrated by the amount of pressure he felt from Jackson and Kawhi Leonard, who played on top of Durant's right shoulder no matter where he was on the floor. When Durant's defender influenced him baseline, Duncan was there to meet Durant at the rim.

I had been advocating for Durant at the 4-spot, but the Thunder were unofficially minus-13 in Game 1 when fielding small lineups with Durant at power forward. The absence of the extra length and Ibaka's shot-blocking allowed the Spurs to set up shots beneath the rim.

I'm not willing to surrender just yet, not until we see it with Ibaka at the center spot, so that the Thunder can fully leverage their athleticism. With Perkins out there, Oklahoma City can't take advantage of their agility, nor can they stretch in the half court. And in the six minutes with both Sefolosha and Harden on the floor with Durant as the power forward, the Thunder were a plus-4. Durant proved tonight that there’s no good reason that with his wingspan and intuition that he can’t hold down the rebounding duties of a power forward.

Durant also made a few nice plays as a half-court improvisor. It’s fun watching him be a playmaker, something that's starting to happen a little more regularly. The pindown from Perkins has been Durant’s morning coffee within the Oklahoma City offense over the past season. So it was nice to see the Perkins screen result in a pass to the big men when Leonard tried to top-lock the action. Perkins rumbled hard to the hole, where Durant found him to extend the Thunder's lead to seven.

How many members of the 2011 rookie class would trade places with Kawhi Leonard? Even though there were 14 guys picked ahead of him in the NBA draft, Leonard got tapped for the best apprenticeship in basketball -- the wholesale investment of the San Antonio Spurs into your development as a pro basketball player. Even though Leonard played only a sliver of the fourth quarter, he's being served some seriously high-end royal jelly.

During his 25 minutes of action, Leonard smothered Durant, forcing him weak side regularly. He also drained a big 3-pointer during the closing minutes of the first quarter, and delivered a high-low bounce pass to Duncan through the middle of the lane that would give anybody the impression Leonard had been playing with the Spurs since birth.

Both teams were conservative with their pick-and-roll coverages. From the outset, Ibaka dropped back into the paint to deter penetration from Parker. The Spurs didn't allow their big men to stray too far from the paint, which is fairly normal for them. Few hard shows, not much blitzing, though the usual dose of pressure on the sides, especially from San Antonio.

Not seeing Ibaka on the floor for the final 16 minutes was a surprise, especially since he presided over much of the San Antonio slopfest in the first half. We can't credit him for a turnover, but it's probably not a coincidence that the Spurs were at their most tentative when Ibaka was on the floor and speed ruled the game.

Meanwhile, Tiago Splitter played 13 big minutes. He opened the fourth quarter with consecutive buckets, the first after rolling hard to the rim when the Thunder trapped Ginobili on the side pick-and-roll, the other on a baseline cut when he slipped beneath a ball-hawking Thunder defense.