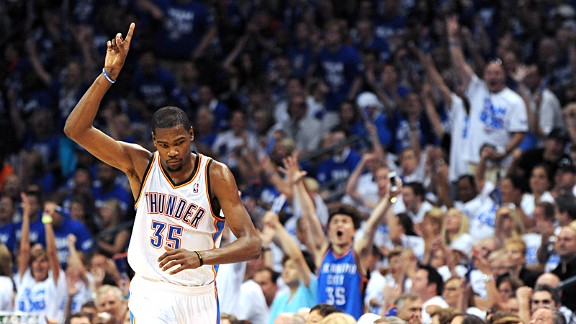 Even when you include Kevin Durant, open role players score better than superstars in the clutch.

Time is short in a crucial playoff game. Your team is desperate for a bucket.

If you're lucky, the story goes, your team features a real star, a one-man offensive supernova -- the kind of guy who makes a ton of money mainly because he knows just how to get the job done in moments like this. He won't wilt. He won't shudder. He won't shrink from the moment. No matter what the coach drew up, and no matter what the defense does, he'll get off a decent shot. 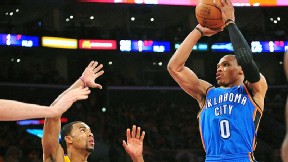 In the final five minutes of close 2011-2012 playoff games, through June 4, superstars (see list to left) are making 41.8 percent of their shots. A selection of notable names:

The insinuation is that a lot of players would wilt, shudder or shrink from the moment. The idea of trusting it all to the guy is that the other guys can't handle the pressure.

But guess what: The evidence is mounting that not only can can role players handle big shots, but because they tend to be open, unlike superstars, role players tend to make shots at vastly better rates.

There are a hundred examples in our minds of superstars flying solo to destroy the opposition. For instance, the 1988-1989 Chicago Bulls, who inbounded the ball to Michael Jordan with a first-round series on the line.

In his book "Sacred Hoops," Phil Jackson remembers young Jordan. "When push came to shove," he writes, "the other players usually faded into the background and waited for Michael to perform another miracle."

With literally all five Cavalier defenders charting his movements, the Archangel delivered a shot from basketball heavens, consigning the Cleveland fans to a new depth of sports hell.

In moments like that it's obvious that you're watching something almost nobody else can do.

This is why when we talk about crunch time, the big question is almost always: Who's taking the shot?

But there's a mounting body of evidence, confirmed by exhaustive review of crunch-time video from the ongoing playoffs, that a much more important question is: Who's open?

Because if you have to pick between any old open player and a superstar facing whatever defense superstars face ... well, it's no contest.

You watch a solo hero attack a defense like that, and in the back of your mind there's some sense of "the right basketball play." But in the front of your head there are closers and then there are other players, and who else is going to shoot?

Certainly not some no-name player who's open only because his guy left to double the star. If this guy misses ... wow. If even the open guy happens to hit the shot, it's still not quite the same kind of story.

People will be wondering what happened to your star. Didn't he want to be the star tonight?

The Archangel offense, where your star shall save you, takes care of all of that. The only problem with it? It doesn't work. Not usually, and even less against good teams.

"The better defensive teams," Jackson writes, "had little difficulty shutting it down. Our nemesis, the Detroit Pistons, came up with an effective scheme called the Jordan Rules, which involved having three or more players switch off and close in on Michael whenever he made a move to the hoop. They could get away with it because none of the other Bulls posed much of a scoring threat."

We are only a few years into having public statistics that show things like a player's crunch time field goal percentage. They're telling us things that fly in the face of conventional thinking. Mostly that even though it has long felt like Kobe Bryant, Carmelo Anthony, Derrick Rose, Kevin Durant, Dirk Nowitzki and the like almost never miss with the game on the line, the truth is that all of them miss a ton. Look at enough games, and none of them have field goal percentages worth bragging about over any long period of time.

And then when you wonder what's up, one of the ideas you simply have to discard is the idea that these players aren't good. They are. Analyze it however you want: They're the best in the world.

Watch those players in crunch time on video, and eventually it's incredibly obvious: it's about the defense. Those players, at that time of the game are under tremendous pressure to make the play. Fans aren't the only ones who expect those guys to deliver. Owners and coaches do too. And the defense knows it. A superstar headed into the lane with the game expiring is a player who is double-teamed at least, if not quadruple-teamed.

That's your problem right there.

On teams with "go to" players, then, a lot of crunch time offense comes down to a fairly simple dilemma. What's better: A superstar shooting against whatever defense he may be facing, or some other guy who is wide open? 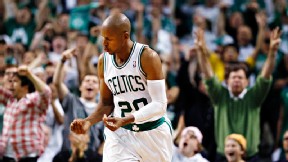 In the final five minutes of close 2011-2012 playoff games, through June 4, open non-superstars (see explanation) are making 54.2 percent of their shots. A selection of notable names:

Ryan Feldman of ESPN Stats & Info spent a lot of time watching playoff video on NBA.com's new stats tool to try to answer that question. We made a list of go-to crunch time scorers a few weeks ago, and he compared their performance to "random open dudes."

Feldman looked at the players above, with the help of NBA.com's new advanced stats tool, to see how their shotmaking in the last five minutes of 2012 playoff games within five points compares to ... all other players who were wide open.

It wasn't totally easy. "Whether or not a shot is an open uncontested shot is subjective at times," Feldman acknowledges. "I did my best to stay consistent on this. I judged it based on where the defender was -- whether or not he was within about an arm’s length from the offensive player when the offensive player got into his shot release. Basically, I judged it on whether or not the defender closed out quick enough to get a hand up by the time he was into his shot release."

Half-court heaves were not counted.

And you know what we found? The Archangel, Hero Ball offense isn't the best. Though it may not be as fun, if your star has a passing lane to a wide open shooter, that's almost certainly better.

That is a massive difference. Teams shooting 41.8 percent from the floor almost never beat teams shooting 54.2 percent. It is a strong reflection on the power of competing against no defense.

No, the other players aren't as talented as the stars. And there is certainly more to analyze: For instance, at this time we have not included free throws in the analysis, which could tip things a bit more in the stars' favor.

Also, certainly some stars, most notably Paul Pierce and Kevin Durant, have been excellent late in games.

But make no mistake: The openness of the role players is, it turns out, generally more than enough to make up for the gap in talent between role players and superstars. Wide open NBA players are effective, period.