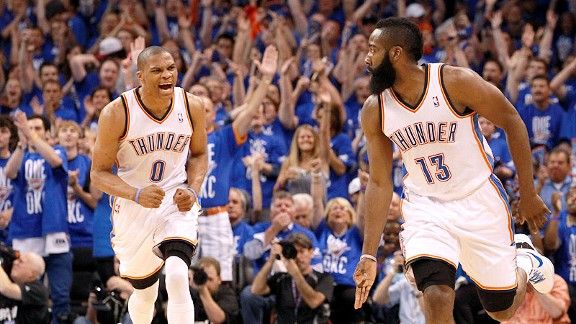 The Thunder excelled with Russell Westbrook (L) on the floor in Thursday's Game 3 win over the Spurs.The San Antonio Spurs may have been due for a loss, but not this kind of loss.

The winners of 20 straight contests, San Antonio lost in grand fashion Thursday night to the Oklahoma City Thunder, falling 102-82. It was just the Spurs' third loss this season by 20 points or more, and it was their lowest offensive output in the playoffs.

The Thunder, who now trail 2-1 in the Western Conference Finals, dominated in virtually every way in Game 3, but their advantage in the paint proved to be the difference. Oklahoma City outscored the conference’s top seed 44-24 in the lane. Nearly half of the Thunder’s shots came in the painted area, and they made 52.4 percent of those attempts.

Stats in the Paint - Game 3

Inside of 5 feet, the Thunder not only excelled offensively but also locked down the opponent. They scored 38 points (19-33 FG) from that distance Thursday night, holding the Spurs to a playoff-low 22 points on 11-of-20 from the field.

Pressure defense was also a key for the Thunder. They had 14 steals, including six by G Thabo Sefolosha, and San Antonio finished with 21 turnovers. That is the most turnovers by the Spurs in a playoff game since 2007, when they committed 23 against the Jazz in a win.

Those turnovers allowed Oklahoma City to get out and run. The West’s second seed outscored the Spurs 23-9 in transition, converting 10 of their 14 field goal attempts. San Antonio managed only two buckets in transition.

In the half court, the Thunder were able to take away one of the Spurs’ main weapons: the pick-and-roll. San Antonio scored 30 points off pick-and-roll plays in each of the first two games of the series, but the team was held to only 12 points on such plays in Game 3.

Tim Duncan finished with 11 points on 5-of-15 shooting. He did set a milestone by passing Kareem Abdul-Jabbar for the most blocks in playoff history (478), but it comes with a caveat: Blocks were not an official stat until 1973-74, Abdul-Jabbar’s fifth NBA season.

The Thunder were able to triumph despite star G Russell Westbrook scoring just 10 points. Westbrook contributed nine assists and four steals, though, and Oklahoma City outscored the Spurs by 29 points when he was on the court. Westbrook averaged 22.0 points in losses in Games 1 and 2.

While Kevin Durant poured in 22, it was a pair of unlikely players that provided the punch for Oklahoma City. Sefolosha and Serge Ibaka combined for 33 points in Game 3; they had just 22 points total in the first two games of the series.

If the Thunder continue to control the interior and transition game, they could give the Spurs fits. Tonight’s effort proved that the Thunder are very much alive in this series.