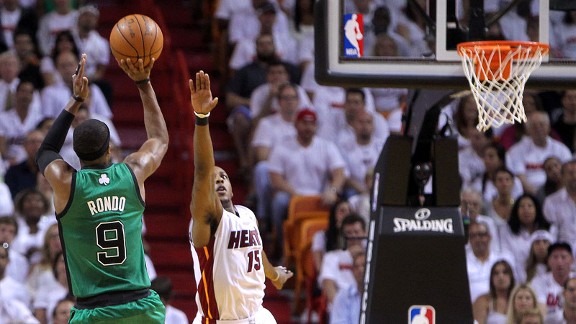 The Heat will live with Rajon Rondo taking jumpers like this one, even if he keeps making them.

In the playoffs, a coach is often judged by his ability to make the key adjustment that helps his team win -- think the Bulls shutting down the Lakers in the 1991 Finals by switching ace defender Scottie Pippen on to Magic Johnson, or the Hawks dismantling the 2011 Magic by single covering Dwight Howard with Jason Collins.

However sometimes the best adjustment is to do nothing at all. Many believe Avery Johnson put his team in a tough spot by trying to match Golden State’s small ball lineup when the eighth-seeded Warriors upset the top-seeded Mavericks in 2007.

That’s the question facing Erik Spoelstra and Gregg Popovich as they game-plan in the wake of their respective opponents’ best games.

Spoelstra and the Heat played the percentages with Rajon Rondo in Game 3 by gifting him wide open jump shots, and the Celtics point guard torched them for 44 points including 10-12 on jumpers outside the paint.

Heat writer Couper Moorhead teases out the dilemma facing Spoelstra, a coach who knows and trusts the statistics:

As Erik Spoelstra has said, options aren’t rolling in by the dozens.

"I have no idea, I’ll be honest,” Spoelstra said. “We’ve tried almost everything with him, and the conventional wisdom of saying he’s got to beat you over with the score, beat you with the jump shot, and beat you by not getting all the other guys going. They only had 15 assists. And you would never think that he would have that kind of monster game.”

Spoelstra believes in the numbers, and because the numbers say that Rondo won’t shoot the same again, it will take far more evidence of a new truth for him to abandon his current approach. Just as with the belief that earning open shots from efficient, probable areas of the court will yield the highest number of points over time, if you come into a game trying to push another team or specific player to shoot from your desired spots on the floor, one game of those shots falling doesn’t put a tactic in the wrong.

If you’ll pardon the analogy, you can roll a seven as many times as you want in a row, but it doesn’t make you more likely to do so the next time you pick up the dice.

Flip it around, and the Heat’s decision is clear -- if Ray Allen missed all his 3-point shots in one game, would that mean it’s sound strategy to just leave him open beyond the arc?

In other words: no reason to change things now.

The Heat are trusting the wisdom of years of data suggesting that Rajon Rondo just does not make that shot regularly, and know that one brilliant shooting game does not a great shooter make.

Popovich faces a trickier problem. On the one hand, the Spurs were flat, the Thunder played with tremendous energy and passion at home, and this is San Antonio’s first loss in nearly two months... why change the formula now?

On the other, the Thunder made significant adjustments that really bothered the Spurs, particularly switching the absurdly long and awfully quick Thabo Sefolosha onto Tony Parker. Left with no room to breath, much less execute their fluid offense how they had in their 10 straight playoff wins, Parker and the Spurs looked utterly flummoxed in Game 3.

But as John Hollinger notes in today’s PER Diem, the real shift in Game 3 was in the pace of the game -- a vital element of the Spurs attack. There were 91 possessions in Game 3, about league average during the regular season. The Spurs prefer to be above 96, preferably closer to 100.

We're not talking about some minor, marginal shift. A jump from 33 percent to 57 percent means that Oklahoma City's odds of winning don't just increase; they nearly double if they get the pace down to 95 possessions or fewer.

Why is that? Looking a little closer, we can see that each team benefits on both sides of the ball from playing its preferred pace, but the biggest changes come at the defensive end.

Everybody focuses on the Thunder's athleticism and finishing ability in the open court, but a fast-paced game does more to expose their poor transition defense than to highlight their offensive brilliance. Meanwhile, the Spurs defy expectation by dramatically improving defensively in an up-tempo game, presumably because they manage to maintain floor balance even in the face of a helter-skelter environment.

So for all the sharp tactical adjustments Scott Brooks and the Thunder made in Game 3, the Spurs might be back in business if they can dictate tempo.

No one can stay in front of Tony Parker forever, but the Spurs offense is built around the pass -- if one player doesn’t have an immediate play, he needs to move the ball. Parker is the primary piston pushing the Spurs high-paced attack and Sefolosha has a gift for delaying the speedy point guard by taking away Parker’s first or second option. This causes Parker to give up the ball before he can break down the defense.

Once the ball is out of Parker’s hands, only Manu Ginobili really has the one-on-one ability to worry the Thunder. The result is that the Spurs use more of the shot clock than they typically do, and end up with, say, Stephen Jackson trying to create off the dribble as the shot clock nears zero.

Despite the unsettling outcome, Popovich might only make some minor adjustments -- certainly nothing so dramatic as suddenly playing a seemingly forgotten role player like Sefolosha for 37 minutes. The Spurs are more likely to simply emphasize some of the things they already do, like running Parker around baseline screens. One ugly night does not negate the 20 straight games San Antonio won by adhering to their formula.

There’s something thrilling about the moments when coaches are forced to abandon their preferred strategies in favor of guerilla tactics aimed at exploiting an opponent’s weakness, like when Spoelstra deployed Shane Battier to lock down David West.

And the best 7-game series provide a stage for dramatic shifts in momentum, strategy and even legacies. But despite the results of their most recent games, don't be surprised Spoelstra and Popovich to stick to the script in Game 4.