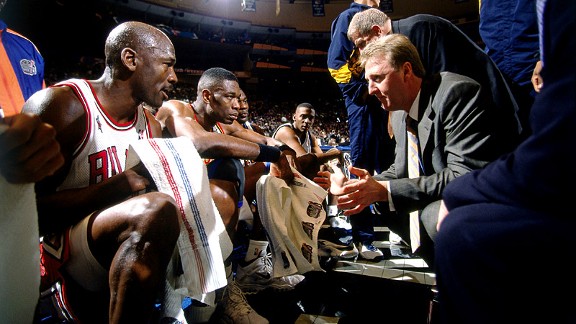 In 1998, Larry Bird coached Michael Jordan in the All-Star Game at Madison Square Garden. The next year he published a book with Jackie MacMullan called "Bird Watching: On Playing and Coaching the Game I Love."

More than a dozen years after the fact, allow me to point out the book is fascinating and fun to read, and includes this anecdote from the "Space Jam" set:

The movie people really took care of us. They had this big room in the hotel filled with food, drinks, anything you wanted. One cooler had beer, another had soda, another had sandwiches. And then there was this big cooler marked MICHAEL ONLY.

You weren't supposed to touch that one, because it was all Michael Jordan's special stuff they flew in just for him. So one day Bill Murray and I are sitting in there, and I go over to Michael's cooler and lift up the lid.

There was this girl there, and her only job was to make sure everything was just right for Michael Jordan, and she starts yelling at me, "Larry, you can't go in there!" I said, "What are you talking about? That's bull. Everyone here is family." She was getting all nervous and said,"No, no. Those are all the things Michael told me he wanted, and if you take something out of there, Michael won't be able to have it, and we just can't let that happen!"

Bill Murray is laughing the whole time listening to this, because whenever Michael walked into the room he always went to one of the other coolers and pulled something out, just like the rest of us. He hardly ever opened his own cooler.

Anyhow, I waited until the girl left, then I reached in and started grabbing stuff out of Michael's cooler and throwing it out to the crew, all over the set. I threw it everywhere! Gatorade bottles, some special drink he liked, candy bars ... She was so mad at me.

For the rest of our stay, every time I went by that cooler I took something out.