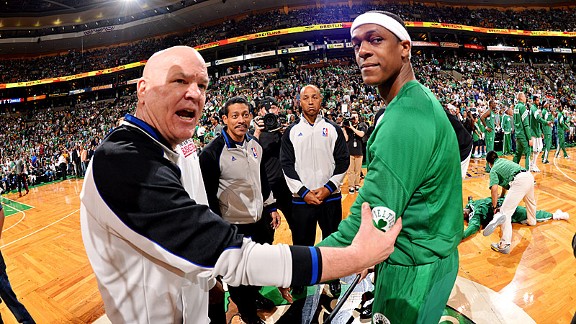 Following Game 4 of the Eastern Conference Finals, NBA fans were outraged that the team of officials working the game -- a team that included Bill Kennedy and Joey Crawford, two guys unafraid to make "the big call" -- had too big an impact on the game.

Too much controversy. Too many whistles, offensive fouls and stoppages. Not enough basketball!

And most importantly, the thinking went, keep the players on the court. Virtually every top player in Game 4 wrestled with foul trouble, and both LeBron James and Paul Pierce fouled out entirely.

But the video shows that the officials had no choice but to become central to the game. With one physical play after another, the players dared the referees to stop them. A by-the-book referee could have called multiple fouls on almost every possession.

We have talked a lot about flopping -- players pretending there is a foul when there really isn't. Also alive in the NBA, and particularly this playoff series is the opposite of that: players fouling the heck out of each other while pretending nothing's happening at all.

For example: James drew a key offensive foul on Kevin Garnett when Garnett grabbed James' arm with both hands to prevent him from rotating to a Rajon Rondo drive. Garnett kept his arms in. From the baseline official's point of view it looked like nothing was wrong, which is why that kind of grabbing is typical. This play ended differently only because James, in an effort to wrench his arm free, yanked Garnett to the ground, virtually demanding the referees react.

Earlier in the fourth, Joel Anthony was whistled for pushing Garnett in the back as the two fought for a rebound. It was a good call, except at the same time Anthony was nudging Garnett, Paul Pierce was shoving Anthony in the back with two hands. Calling it either way would have simultaneously been perfectly legitimate and in no way entirely accurate.

By the final period the video shows these types of plays were happening all over the court.

From the league's point of view, the priority, surely is to present fans with a more exciting brand of basketball, with stars on the court as long as their coaches want them there, and with teams actually scoring baskets now and again instead of succumbing to the rigors of playoff physicality. The two teams combined for six total points in all of overtime.

So, what is your solution? It seems clear the NBA needs two things, which at first may seem contradictory:

We find ourselves needing more ways to get players not to foul, but at the same time less of the old punishment for fouling. In short, we need new ideas. New incentives to get players more focused on playing basketball and less focused on the referee games.

What do you suggest?