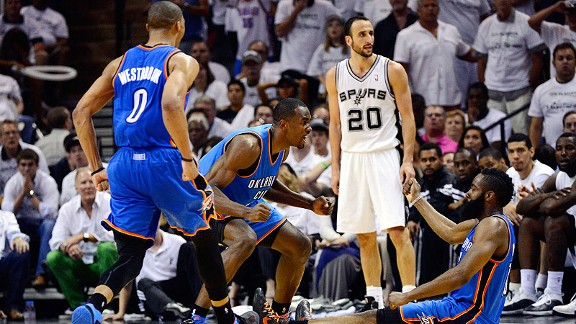 James Harden's four-point play was one of those revealing postseason moments we hear about.

We often put too fine a point on identifying the singular moment a team realized its full potential. That process isn’t linear. It usually takes years of growth, consolidation, spurts, slumps, revisitation and then, at last, more growth before the cycle repeats itself.

So nothing definitively changed the Oklahoma City Thunder at the 5:17 mark of the fourth quarter when James Harden drained a 3-pointer after a quick push upcourt by Russell Westbrook, and was fouled by Manu Ginobili on the follow-through. It wasn't the first nor would it be the last jumper in transition Harden makes as a member of the Thunder. The bucket stretched a nine-point lead back to 12, but it was also one of those rare snapshots that captures a different, deeper image of a team at the moment of its ascension.

On the other end, Serge Ibaka had walled Ginobili off the lane, then swatted his scooping layup attempt. Ginobili tumbled out of bounds on his landing, an exaggerated fall that left him little chance to defend the Thunder in transition. The San Antonio Spurs are very quick to the ball, the paint and the corners on the break, but the arc above the break, particularly on the weak side, can be vulnerable. That's where Harden spotted and where a point guard who is often prone to pulling up for his shot passed one up and looked precisely where he should have for an easy dime.

The cycle of maturation hasn't stopped for the Thunder, and they needed timely, contested, not-exactly-high-percentage shots in the closing minutes to fight off the Spurs. They may not win a trophy this season, or at the end of the next one. But when a team seizes an opponent's core strengths -- poise, timing, judgment -- and claim them as their own, it can be profound, especially this late into spring and especially against a team as masterful as San Antonio.

The Thunder have made smart adjustments since the start of the series, and one the Spurs haven't been able to counter has been Westbrook's decision to repeatedly attack the soft spot of the Spurs' defense.

Early in Game 3, it became clear Westbrook was making a concerted attempt to penetrate, then look weak side for an open shooter. That's because, for San Antonio, the helper always comes from the weak side. He might have farther to travel -- and there are going to be possessions when a defender covering the strong-side corner probably could've met the drive near the basket -- but that's all part of playing the percentages. Maturity is essentially the acceptance of a little loss for greater gains, and the Spurs are a very mature team.

Until very recently, the Spurs also had the individual defenders to contain penetration and limit the need for any kind of help. Today, San Antonio features different personnel, while Westbrook can explode. The question for Westbrook was, once he got a step or two off the dribble, could he make plays that could compromise the Spurs' steadfast devotion to keeping the ball-side defense in place -- even if the pull-up jumper is there?

Westbrook's willingness to understand the nature of this scheme has been enormous. There are possessions when he looks like the pointiest of guards, toying with the Spurs so they can't tell which is the strong side and weak side. At about the eight-minute mark of the second quarter, Westbrook worked a pick then a re-pick with Ibaka at the top of the key -- first making the right side the floor dominant, then the left. Daequan Cook was parked in the right corner, with Derek Fisher in the left corner.

Tony Parker and Manu Ginobili were the respective defenders and as Westbrook skidded right, then left, you could see both Parker and Ginobili suspended. Where would Westbrook ultimately commit? Would he streak up the left or right edge of the lane and, if so, who would help?

These aren't always easy passes to make, which is precisely why the Spurs design the system accordingly. And sometimes it's not a spot-up long-range shooter such as Cook. Increasingly in Game 5, the Thunder made Ibaka the weak-side release. We saw that on a couple of occasions, one late in the first half, the other midway through the fourth quarter. On both possessions, the Thunder set up an angle pick-and-roll -- the first on the left side, the second on the right. Twice, Tim Duncan had to help off Ibaka along the weakside baseline, and twice Westbrook hit Ibaka there for face-up jumpers.

When a point guard can rack up four assists bludgeoning a good team with pinpoint passes off a strong set, an off shooting night became eminently more tolerable.

During the postseason, Scott Brooks has adopted a quaint rallying cry that the Thunder, first and foremost, are a defensive team. While Oklahoma City is a very respectable defensive team -- ranked ninth in the regular season -- the Thunder are still playing basketball because they're an offensive juggernaut. You can't fault Brooks in the least because he's being disingenuous. Part of a coach’s job is to get his team to take leaps of faith, to offer prophecies that he hopes his team will fulfill.

Thabo Sefolosha played 22 minutes in Game 5, as Brooks opted to remain big for much of the game. Much of that can be attributed to Kendrick Perkins working as hard as he ever did in Boston. I didn't believe he had a chance to stick for big minutes in this series, but Brooks has made sure that Perkins has gotten help when he’s needed it. Team Defense is essentially the task of figuring out on your team who needs what, when they need it and for how long.

So when Brooks decided he still wanted Perkins' mass on the floor to limit Duncan's ability to set up either on the block or as a screener, the Thunder coach put the onus on the other guys on the team to use their quickness to cover. They've accepted the challenge nicely.

Regarding Sefolosha, there are so many little moments in a game -- they’ll mostly go unnoticed -- when his defense will drop the slightest particle of dust in the Spurs’ machinery. With just less than five minutes remaining in the first quarter, Sefolosha dug in against Tony Parker way out on the wing to deny what should’ve been a basic entry feed into Duncan off the right elbow. It’s the type of routine pass that triggers basic offensive sets and one that usually goes off without a hitch.

But there was Sefolosha, hounding Parker with all kinds of pressure. Perkins wasn’t make life easy for Duncan, but it was Sefolosha whose work was gumming up the transaction. When Parker recocked to go over the top with more height, Sefolosha scampered off Parker to front Duncan.

Duncan ultimately had to move high to collect the pass -- and did -- but it took four seconds and, by that time, the Spurs' motion had stalled in the half court. That latter consequence is even more important, because that ballet the Spurs performed through much of Game 2 was predicated on continuity. But if you delay that post entry, then everyone on the weak side for the Spurs has to hit pause on the set.

Take away that fluidity, and the gears begin to grind. After that, the Spurs are just another team that’s having trouble getting into its stuff in the half court.

Brooks certainly can't keep Harden off the court after the first few minutes, not when he's plus-24 as he was on Monday night. If Brooks decides to go with two big men during crucial stretches, that means Sefolosha is usually the odd man out. In Game 3, Brooks seemed very comfortable in a world where Durant is the Thunder's power forward -- and that's his best option moving forward. But Perkins intends to make this a very protracted, difficult decision.

The Spurs threw strong double-teams at Durant all night on the wide pin-down that decimated the Spurs in Game 4. Durant was surrounded by bodies whenever he ran high for the catch and, more generally, whenever the Spurs had a body to spare.

The first time Oklahoma City ran the pin-down in the second half just after intermission, Perkins dove to the hole while Durant immediately bounced a pocket pass through the two defenders to hit Perkins on the move. Durant looked to make plays a couple of times before the Thunder found new ways to get him the ball and went away from the call.

Truth is, when a guy with this much length can dominate in a one-on-one matchup anywhere on the floor, it doesn’t demand radical innovation to get the ball to him.

On Monday night, Durant took the hard work upon himself. Sometimes that meant Durant would collect the ball 30 feet out and isolate on a clear-out. Midway through the fourth quarter, Durant attacked Stephen Jackson with a swinging up and under move, then squared his frame airborne before launching a jumper that extended the Thunder’s lead to 10.

At other times, they'd swing the ball quickly to Durant to try to beat the defense. Whatever the case, Durant had to work a bit harder for his shots in Game 5 -- even though he made it appear as easy as ever.

The mutual respect between the Spurs and Thunder can't be overstated and is highly unusual, even in a more fraternal NBA. The Thunder have made no secret about using the Spurs as their organizational template, while Popovich has praised Durant as "arguably the best player on the planet. Even Perkins, who usually enjoys working up a healthy loathing of his opponent, has resorted to casting a broadcasting crew as his adversary.

The lovefest is a huge departure to what's happening back east, where the Miami Heat and Boston Celtics actively loathe each other, something that can't escape detection even in halftime interviews.