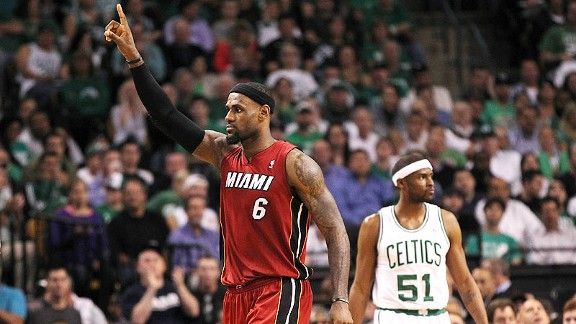 LeBron James did something that only Wilt Chamberlain had done in NBA postseason history. The Heat forced Game 7 with a 98-79 victory over the Celtics on Thursday night.

Facing elimination on the road, the Miami Heat forced Game 7, beating the Boston Celtics 98-79 behind an incredible performance from the MVP.

LeBron James scored 45 points and added 15 rebounds and five assists, just the second time in NBA history a player put up those numbers in a playoff game. According to the Elias Sports Bureau, Wilt Chamberlain had 50 points, 15 rebounds and six assists in the 1964 Western Division Finals against the St. Louis Hawks.

James had 30 points at halftime on 12-for-14 shooting, a playoff career high for points in the first half. He finished 19-for-26 (73.1 pct) from the floor, his highest field-goal percentage and second-most field goals in a playoff game.

James scored 20 points in isolation Thursday, 11 more than his previous high in the series and nearly as many as the first five games combined.

Elias tells us that James is the first player to score at least 25 points in six straight playoff games against the Celtics since Kareem-Abdul Jabbar did it in seven straight in 1974.

LeBron attacked the Celtics down low, finishing eight plays with post-ups, going 7-for-7 from the field and drawing a shooting foul (1-for-2 FT) on such plays. That’s more field goals from the post than in the first five games combined.

According to Elias, the Celtics’ 19-point loss is tied for their third-worst loss in a potential series clinching home game in franchise history.

Rajon Rondo had an odd game, leading the Celtics with 21 points and 10 assists. But he also committed a playoff career-high seven turnovers, almost half of his total for the series entering Game 6.

LeBron His Own Big 3

James outplayed Boston’s “Big 3” of Paul Pierce, Kevin Garnett and Ray Allen by himself in almost every way on Thursday, outscoring them, outrebounding them and racking up more assists.

The 31 combined points is the lowest in a playoff game that all three played in since they became teammates in the 2007-08 season. In fact, four of their five lowest totals have come against teams featuring LeBron James.