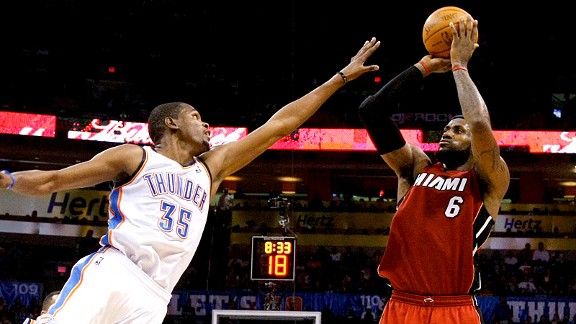 LeBron James (right) may struggle in the NBA Finals when the Heat go up against the Thunder.LeBron James was stellar against the Boston Celtics, averaging 33.6 points and 11 rebounds per game while making 52.7 percent of his field goals during the series. However, he’s got a tough road ahead of him when the Miami Heat take on the Oklahoma City Thunder in the NBA Finals.

Much of James’ struggles in the NBA Finals have come in the fourth quarter. For his career, James averages just 5.7 fourth-quarter points, by far his lowest fourth-quarter scoring average of any round in his postseason career.

What’s causing his decline in production? It’s in part due to his inability to get “easy points”. James’ production in the paint, in transition and at the free throw line has declined in the Finals.

James has averaged almost two more points in the paint before the Finals than he does in the Finals, and nearly three times as many points from the free throw line.

James’ two regular season performances against the Thunder this season were wildly different. in the first meeting James scored 17 points, going 0-for-3 from 3-point range and 1-for-2 from the foul line in a 103-87 Oklahoma City win.

In the second meeting James scored 34 points, going 3-for-7 from 3-point range and making 11 of his 13 free throw attempts. The Heat won that one 98-93. James scored 12 points in the paint in both regular season games against the Thunder.