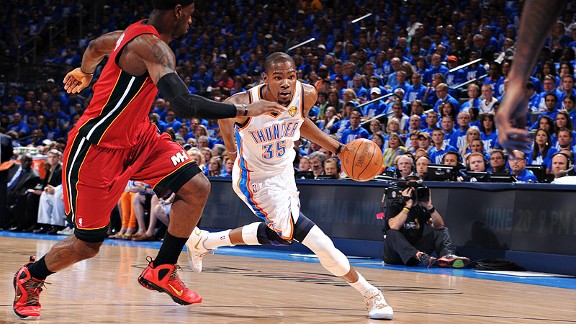 The best scorer in the NBA might also be the least dramatic.

The Game 1 stat sheet says Kevin Durant scored 36 points, including 17 in the fourth.

A 17-point quarter is a 68-point pace for an entire game.

And yet, if I'm honest, if there were no stat sheet, I'd have guessed Durant had about 25 for the game.

The Finals are the NBA's biggest stage. And stages were built to show drama.

And while Durant brings tons of great basketball, one of the secrets of his game is that he brings very little drama.

Think about the most memorable plays you have ever seen. Allen Iverson slicing through the tall trees in the lane, John Starks dunking over the whole Bulls team, Michael Jordan flying. In every one of them, there's a massive dose of human struggle. Here's a human doing something that ought not be possible. Here are long odds -- overcome.

The way Durant chooses to play, bless him, the odds are in his favor. From his hands, the ball has no battles to wage. It simply heads home, as if running downhill, to the bucket. Once he catches it, the most likely thing is that Spalding will scurry home in double time.

Speed is a big part of it. A huge bunch of his points come from touching the ball for less than a second. He catches. He shoots. Bucket. Not much time for memorable things to happen, but more than enough time to make work for the scorekeeper.

Another Durant favorite is to slip quickly to the hoop. But we're not talking about a big indulgent bunch of look-at-me warm-up dribbles. It's catch, rip and run. The shot comes after one dribble, or two if he's all the way out by the 3-point line. Then he's finger-rolling, laying up or dunking in about a second after he caught it. Turn to your buddy at the wrong instance, and Durant is running back on D before you know what happened.

He also scores on putbacks and fast breaks, which are known to be fast, and at the free throw line, which is known to be forgettable.

In Game 1, all his points came in one of those speedy ways, except for one bucket. A few minutes into the fourth, Durant used a screen to get himself guarded by his chosen defender -- an exhausted-looking Dwyane Wade. After catching on the right wing, he sized up Wade and used a few moves and a couple of dribbles to work to his preferred spot, where he rose, fired and hit nothing but net to give the Thunder their biggest lead up to that point, 80-74.

Total time he held the ball: less than six seconds.

The end result of all these quick attacks is a player who is incredibly difficult to guard. Even if you want to double-team him on the catch -- about as aggressive as NBA defenses ever get -- you generally have less than a second to do so.

Against most of Durant's moves, there can be no help.