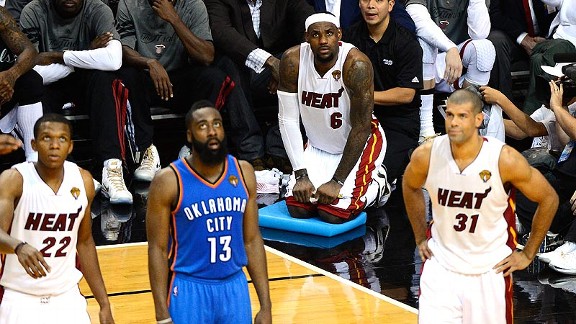 LeBron James, sidelined for portions of crunch time with a cramp, was watching.

The closing minutes of Game 4 featured a dramatic collection of memorable moments. Some favorites:

At first it looked like a case of Derek Fisheritis. With a little less than six minutes to go, LeBron James held the ball at the top of the key, with Kevin Durant to beat. He waved an arm, directing the traffic of his teammates. Then he put the ball on the floor and drove hard to the left. Fisher collapsed the defense on James, and James simply collapsed ... all the way to the court, coughing up the ball in the process. The game was tied at 90, Thunder ball.

If ever there were a time to ham up an injury.

The next few minutes, however, told the story of something very real. Not only did James sit out two minutes and five seconds of crunch time of a game in which he had been playing brilliantly, but when he was in he relinquished what he is best at: guarding good offensive players (he checked Thabo Sefolosha) and driving to the rim (he shot mainly 3-pointers at the end).

He did, however, hit two huge shots -- a short banker between when he first cramped and was helped off the court, and a monster 3 that broke a tie with 2:51 left. The Heat never trailed again.

There are two ways to tell the story of Russell Westbrook's crunch time. One way is to point out he was probably the most productive player on the floor. Making two of three shots from the floor made him both the only player on either team to hit more than one bucket in the final five minutes, and the only player to shoot better than 50 percent over that spell. He also created one of the game's perfect plays, getting his team a quick and tidy bucket with 40 seconds left to pull Oklahoma City within three.

In addition, though, well ... he kicked the ball out of bounds, forced a long jumper, turned the ball over to Dwyane Wade and was the star bonehead in the moment that will serve as Exhibit A for those who insist young teams can't win it all.

With 17 seconds left, Udonis Haslem and James Harden had a jump ball. After a couple of attempts, Harden appeared to get the ball to Kevin Durant. But Shane Battier brilliantly decided to create another impromptu jump ball, and won it, poking the ball to Mario Chalmers.

This was about to be a serious test of the Heat's spontaneous offense. The shot clock was in the meager single digits. Could the Heat create a decent look? Down three, the Thunder needed all the help they could get, and it looked like they were about to get the ball back for free.

Until Westbrook fouled the heck out of Chalmers, apparently intentionally. Thunder assistant coach Maurice Cheeks made what can only be described as a "stink face." Scott Brooks' relentless optimism was nowhere in sight. On the ESPN broadcast, Jeff Van Gundy had the million-dollar question: "WHY DID HE FOUL HIM?"

"It was just a miscommunication on my part," Westbrook said later. "Nothing I can do about it now."

Westbrook didn't monopolize the Thunder's late mistakes -- Sefolosha took a corner 3 with a minute left -- but he will monopolize the discussion of their mistakes, despite a simply wonderful game overall.

James carried the Heat when they were far behind in the first half. He was a force on almost every play of the game all night, in fact. He was even a force after crampology set in -- after sitting out a bit he checked in again with 4:05 left, and about a minute later he hit that monster 3 to break a tie game.

So when James left the game again, with 55 seconds left in a three-point game, it seemed the Heat needed someone to fill the void.

It seemed even more like that when, on the next possession, the Thunder trapped Wade as he came off a Chris Bosh pick, and the shot clock was down to six seconds. That's when Wade found Chalmers with a pass.

Someone would have to save the possession. If there's a critique of Chalmers it's that he is not cerebral enough -- like Westbrook, he is prone to thoughtless mistakes at times. But this was no time to think. He instantly put the ball on the floor and bulled his way all the way to the hoop, where masterful shotblocker Serge Ibaka was waiting. Chalmers showed Ibaka the ball, withdrew it and then dropped in a stunning right-handed layup with three seconds left on the shot clock and 44 left in the game.

In the final five minutes, Wade was the only one with a steal (one each from Durant and Westbrook) or an assist (one, to Bosh) to go with half the game's six rebounds and two points.

Wade read the defense perfectly, it seemed, on every possession. Twice he created layup opportunities for Bosh, there was the pass to Chalmers, and Wade scored the finger roll, with 2:19 left, that gave the Heat the 98th and 99th points in a game the Thunder scored 98.

There will also be those who wonder if James and Wade keep each other from reaching their full potentials. It may not matter -- they surely are good together, and likely title-bound. But let it be noted that when James couldn't go, when the show was clearly Wade's to run, Flash was as good as he has been all series.