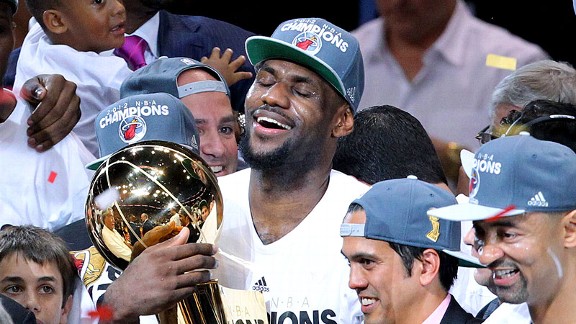 Is LeBron a quitter? Is he an alpha dog? After Thursday night, none of that mattered anymore.

I’d been quietly pulling for the Miami Heat to win the title since April -- and not because I find LeBron James to be sympathetic or because I like the Heat’s brand of basketball or even because I have a lingering attachment to the Heat after covering them in Miami during the 2010-11 season.

I simply wanted it all to be about basketball again, because the public exercise of trying to probe James’ inner life had grown tiresome. The ease with which epithets like choke artist, fraud and much worse have been thrown at James has always been petty and, when examined closely, they usually rang false. In recent months, those takedowns had also become boring, and the prospect that they’d continue to dominate the NBA for at least another year was excruciating.

This first championship won’t make James more palatable to his critics, and some will find a way to belittle the achievement. They’ll affix an asterisk to the title or remind us that James, Dwyane Wade, Chris Bosh and Pat Riley were killjoys who stacked the deck. As insubstantial as those arguments might be, they’re far easier on the ears than the noisy certitude of those who know James is a born loser or a beta male or someone whose personal failings will relegate him to a career of futility. Because you can have a reasonable debate about the legitimacy of a 66-game season, but listening to someone count off the deepest character flaws of a total stranger doesn’t advance any kind of discussion.

Fans should experience the game however they want. If the pleasure of watching pro basketball is derived from casting heroes and villains, as if the league were a landscape of fantasy kingdoms like “Game of Thrones,” then terrific. If the offensive and defensive choreography feeds the joy of watching beautiful systems at work, then that’s cool. If you’re a lifelong hooper who loves to see the game played at the highest level by the very best, then it must be a thrill to watch these guys ball.

I can think of a zillion reasons why a person’s curiosity would be drawn to the NBA. But it became increasingly difficult for me to understand how someone whose interest is vested in a game they supposedly love could watch James during this postseason run and not want to commit his performances to their catalog of fan memories.

If you’re a Thunder fan or just someone who felt the Heat were assembled in the tackiest fashion, then you’ve had good reason not to root for James, but can’t there be appreciation without devotion?

One day, someone a lot younger than you might want to know what it was like to watch this era of superstars in real time. That conversation will turn to James earlier than later. You’ll likely explain the full context of his career, how even the most natural talent has its limitations, how he was a polarizing figure at an evolutionary moment for the NBA. But do we really believe that will be the lead? I’d feel silly emphasizing that above a glowing summation of who he was as a basketball player.

Now that James has won his first championship, the conversation will change. Some of James’ fans will engage in the inevitable -- and insufferable -- score-settling with those who revel in seeing him fail. The dark margins of the fan experience will always play host to ugly exchanges like these, but for the first time in about five years, we can celebrate the game through James, apart from all the other stuff.

Admiring James’ talent as a basketball player has never been about unconditional worship or letting personal and professional shortcomings slide. For many who daydream about what basketball can be, James has simply been the game’s most fascinating player who, at his best, offered us a glimpse of the platonic future -- size, speed, vision, finesse and intuition in a single package.

Somewhere along the way, expectations got the better of James. From the moment he arrived in Cleveland as a phenom, he was graded against a curve. He offended sensibilities by leveraging his skills and marketability to play power broker. To many, this act violated a tacit contract between player and fan, and last year’s Finals were either a divine act of reciprocity or just a demonstration that James never had the goods.

All that talk is over. The next time James falls short -- and he almost certainly will at some point -- we’ll measure that failure in the context of the game, not in the language of hysteria.