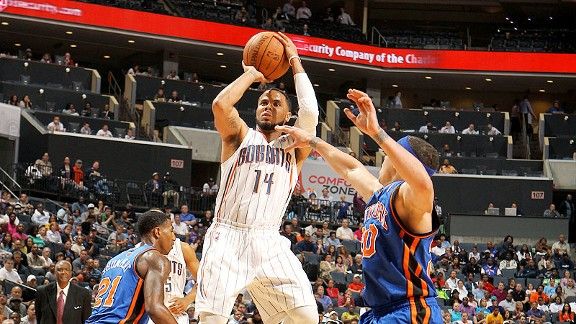 The Bobcats could really use a good spot-up shooter to improve their offense.

It’s obvious the Charlotte Bobcats were a bad team, but why were so historically awful? And how can they address their flaws in the NBA Draft?

The two most utilized offensive play types for the Bobcats were spot-up jumpers and transition offense, which made up a third of their offense. They were very inefficient when using those plays, ranking 30th and 29th, respectively, in points per play.

However, they were the 12th-most efficient team in pick-and-roll ball-handler plays. But they only ran the pick-and-roll on 15 percent of their plays, less often than all but six teams.

Twenty percent of the Bobcats’ offense came from spot-up jumpers, but they ranked dead last in points per spot-up play. They shot 34.2 percent on spot-up jumpers and 29.5 percent on 3-point attempts, both of which also ranked last in the NBA.

Based on their statistical weaknesses, the Bobcats should be targeting a big man in the NBA Draft who can be an effective pick-and-roll player and rebounder.

Of course, the ideal player would be Kentucky’s Anthony Davis, who had the seventh-most points in the country as the pick-and-roll roll man this season and averaged more than 10 boards per game.

With Davis likely going No. 1, Kansas’ Thomas Robinson would the best choice for Charlotte. Robinson scored the 14th-most points in the country as the roll man, ranked second in rebounds per game, and led the nation in defensive rebounding percentage.

If the Bobcats opt for a shooter with their first pick, the top choices would likely include Florida’s Bradley Beal and North Carolina’s Harrison Barnes, both of whom shot about 36 percent on spot-up jumpers.

If they wait to draft a shooter with the No. 31 pick, they could select Kentucky’s Doron Lamb or Vanderbilt’s John Jenkins, both of whom ranked in the top 20 nationally in spot-up points and shot nearly 50 percent on spot-up jumpers this season. Lamb also shot 46.6 percent on 3-pointers (17th nationally) and Jenkins led the nation in 3-pointers made (134).