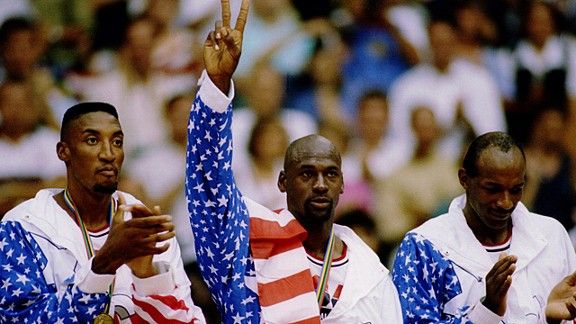 According to AccuScore, which ran 10,000 computer simulations, the 1992 team would win 53.1 percent of the time and by an average margin of one point per game.

No one will ever know the true answer, but let's take a look at the Next Level analytical facts about the rosters at each point of their careers to help make the case either way.

Much has been made about the current team’s weak frontcourt. The 1992 team had four players who grabbed at least 15 percent of available rebounds in 1991-92 (Charles Barkley, Patrick Ewing, Karl Malone, David Robinson). The current team has three players at that rebound rate last season (Tyson Chandler, Blake Griffin, Kevin Love).

The 1992 team had two players (Ewing, Robinson) who blocked at least 5 percent of the shot attempts they faced in 1991-92. No 2012 player had a block percentage higher than 3.4 last season (Chandler).

Four current members had a true shooting percentage (a measure of shooting efficiency that takes into account 2-pointers, 3-pointers and free throws) of at least 60 last season (Chandler, Kevin Durant, James Harden, LeBron James). Chandler (70.8 in 2011-12) led the NBA each of the past two seasons. Only one of the 1992 members had a 60 true shooting percentage (Barkley), although three others fell just short of that threshold in 1991-92 (Malone, Robinson, John Stockton).

Five Dream Team members assisted on at least 25 percent of their teammates’ field goals in 1991-92 (Larry Bird, Clyde Drexler, Michael Jordan, Scottie Pippen, Stockton), plus Magic Johnson had a 49.3 assist percentage in his most recent NBA season (1990-91). LeBron, Chris Paul, Russell Westbrook and Deron Williams had a 25 assist percentage or better last season, but none were as high as Stockton (53.7), who was in the midst of leading the league in assist percentage for 10 straight seasons.

But the NBA experience level is about the same. The 1992 team had, on average, 7.3 years of experience per player. This year’s team has 7.1.

As far as NBA titles, give the edge to the 1992 team. Its players had a combined 12 championships as they entered the Olympics -- five by Magic, three by Bird and two each from Jordan and Pippen.

The 2012 version has seven championships among them, carried by Kobe’s five. LeBron and Chandler each have one. The current team has members of each of the past four NBA champions, while the 1992 team had members of the then-past two champions.

Other than Laettner, all 11 Dream Team members are Hall of Famers. And only two could be considered in the twilight of their careers. Bird had just finished his last NBA season, while Magic had retired the previous year, although he made a brief comeback in 1995-96. As for this edition, one could make the case that all but the 33-year-old Kobe on the roster could appear on another Olympic team again.

The 2012 team gets under way with an exhibition game Thursday against the Dominican Republic on ESPN at 9 p.m. ET. Only time will tell whether this team is the modern-day Dream Team.