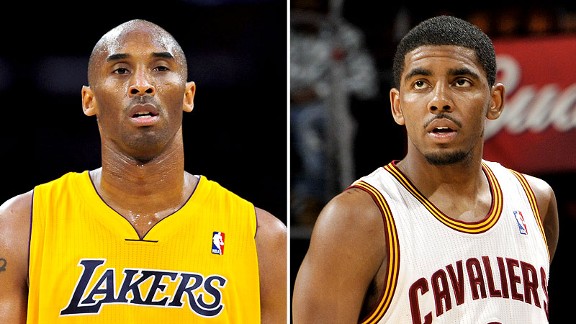 Irving challenged Bryant to a one-on-one game with the loser donating $50,000 to charity.

The majority of a one-on-one matchup between two guards would likely be comprised of single-covered isolation plays.

On defense, it's a different story.

Of the 99 players to defend at least 75 single-covered isolation plays last season, Kyrie allowed the third-most points per play. Only Steve Blake and Dorell Wright were worse. Of those same 99 players, Bryant ranked 24th. Kyrie allowed opponents to go to the free throw line 15 percent of the time, the sixth-highest percentage, while Kobe only sent opponents to the charity stripe on six percent of those plays, the 10th-lowest percentage.

Irving only had nine single-covered post-up plays last season, but he was very effective on those nine plays, shooting 5-of-9 (55.6 percent) with no turnovers or free throws.

Although a small sample size, Irving's 1.11 points per play on single-covered post-up plays was better than Bryant's 0.94.

Of the 225 players with at least nine single-covered post-up plays last season, Irving scored the sixth-most points per play, while Bryant ranked 53rd.

Kobe’s most effective post-up move is facing up from the right block. Of the 31 players with at least 20 of those plays, Bryant had by far the most points per play (1.46) and highest field-goal percentage (71).

JUMPERS OFF THE DRIBBLE

Jumpers off the Dribble
Last Season

Kobe gets the edge in jumpers off the dribble. He shot 40 percent, which ranked 26th of the 95 players with at least 100 jumpers off the dribble last season, while Irving shot 35.3 percent, which ranked 62nd. In effective field-goal percentage, which factors in 3-pointers as well, it's a little closer. Kobe was 41 percent (ranked 42nd), while Kyrie was 40 percent (52nd).