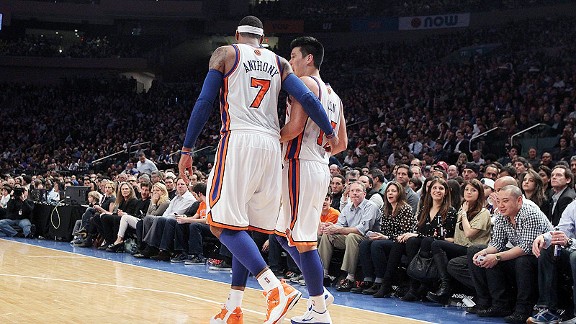 If Carmelo Anthony and the Knicks lose Jeremy Lin, they'll lose a lot of what worked last year.

People are saying all kinds of horrible things about Jeremy Lin now.

One idea is that he's all about the money -- even though he may lead the league in endorsements declined.

Another idea is that he is not very competitive -- even though he has been fending off skeptics with hard work and great play for half a decade.

Another idea suggested here and there is that he's not worth a medium-sized NBA contract because he's not that good of a player, especially on defense.

Here's where the whole project starts to reek of revisionist history. My two cents:

One of the simplest glances at a players' effect is to tally how the team plays when that player is on the floor. Plus/minus is an imprecise tool, but it's no good ignoring it entirely. It's like looking outside to guess what the weather will be like -- look at the satellite image too, but don't forget to look at the sky. It's the heart of common sense.

And it cuts through a lot of hocus-pocus. Box score stats can make superstars out of players who put up big numbers without winning much. Case in point: Carmelo Anthony.

The fact is the Knicks were very good with Lin on the floor. Far better than they were with Carmelo Anthony, Tyson Chandler or Amare Stoudemire. BasketballValue's rankings show that if you adjust for the other nine players on the floor -- who he's playing with and against -- Lin was literally the Knick who enjoyed the most success last year.

Even in terms of raw plus/minus, simply tallying the team's performance when Lin played, he was one of a small handful of Knicks who were starkly in the positive last season. Anthony, Chandler and Stoudemire all played much more, and therefore had much more opportunity to both fail or succeed, but all were squarely negative.

Setting aside team effects, and cleverly rounding up scoring, rebounding, assists and other box score contributions, Lin was the second-best Knick in terms of PER, just behind Anthony and among point guards squarely in the Steve Nash/Ty Lawson range. Lin's also better than Raymond Felton by virtually every measurable method.

Nate Silver has done some rough-and-ready projections for The New York Times about the value of a good point guard. Anything close to last year's productivity and Lin is worth what the Rockets are offering -- simply for his play on the court.

Of course, in a discussion about money, Lin's impact cannot be ignored on the business side, where he is second only to LeBron James in terms of potential to affect a team's bottom line. Teams don't profit directly from jersey sales, but in-arena sponsorships, local TV deals, ticket sales and overall team value could all reasonably be expected to jump on any team Lin plays for.

There are reasons not to pay Lin a ton of money, mostly to do with the fact that it's hard to know what you're going to get. But less fuzzy is what the Knicks actually got, which was stellar play that resulted in the Knicks outplaying opponents.

Let's not be confused about that.

As long as that's so, the only really powerful reason I can see for the Knicks to let Lin walk is if they have other, better plans for those dollars and cap space down the road -- perhaps, as has long been whispered, Chris Paul.