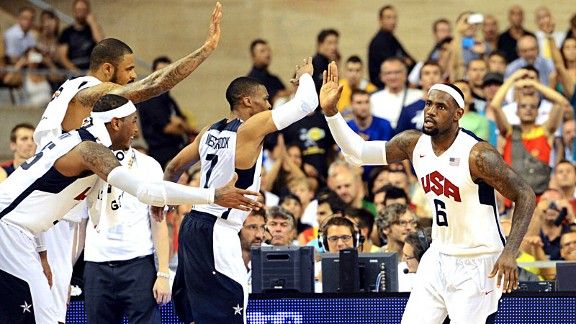 LeBron James and Team USA celebrated a 100-78 exhibition victory over Spain.Spain is widely considered Team USA’s toughest competition in the 2012 Olympics. But in USA’s final tune-up before London, the Americans made it look rather easy with a 22-point win over the Spaniards.

How did Team USA get it done?

With so many tough defensive matchups for Spain, or any other team for that matter, USA tends to create an abundance of unguarded outside jumpers. But of course, it’s a matter of making those shots.

A key for Team USA’s opponents will be hitting outside shots themselves.

Spain had 11 unguarded 3-point attempts and made just three of them (27 percent). That’s a tough formula for success against the Americans.

AREAS OF CONCERN FOR TEAM USA

Team USA was impressive on Tuesday, but Spain was without Marc Gasol, and there are plenty of areas of concern for the Americans.

It’s no secret that Team USA doesn’t have a wealth of post players, while Spain sports a trio of Serge Ibaka, Pau Gasol and Marc Gasol (didn’t play on Tuesday).

Spain had nine single-covered post-up plays against USA. On those nine plays, Spain was 3-for-5 on field-goal attempts and was fouled on the other four plays. USA had just three total post-up plays, none of which were double-teamed.

Is double-teaming the post a possibility for Team USA?

USA double-teamed Spain just twice on Spain's 11 post-up plays. On both of those plays, the ball was kicked out to the perimeter for a missed 3-point attempt.

On pick-and-roll plays against Spain, USA scored nearly three times more points per play when the defensive didn’t commit as it scored when the defend did commit.

USA had 15 offensive plays against Spain's zone defense, all in the second half. USA shot just 3-of-12 from the field (25 percent) and 1-of-4 on 3-pointers with three turnovers, scoring eight points on those 15 plays (0.53 points per play).

Team USA shot well from the perimeter and excelled in transition against Spain. But the Americans might need to figure out a way to better defend the pick-and-roll and post-up plays. If these teams meet again, the Americans may face more zone defense, and that could be an issue if they don't repeat their hot outside shooting performance.