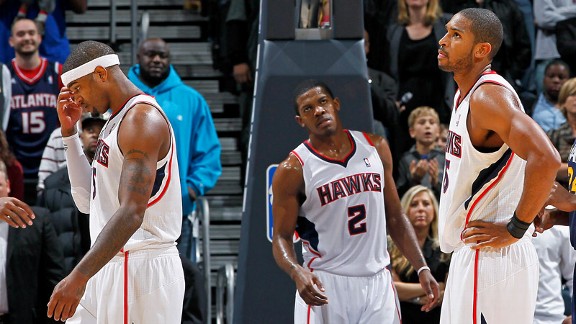 After five seasons in Atlanta, the band broke up.

Some people back home in Atlanta want to know what this upheaval with the Hawks is all about. They’re not angry or suspicious or euphoric or charged -- just ambivalent about what they’ve witnessed since the arrival of Danny Ferry as the Hawks' new general manager. There’s a collective awareness that Ferry’s aggressiveness is regarded as positive by those who follow this stuff closely, but the implications of these big decisions are still cloudy.

For years, the Hawks maintained a dogged consistency. By and large, they deployed the same collection of talent, with a little turnover on the periphery. The quality of the basketball was reliable to the point of predictable. Fans, as well as those inside the organization and around the league, became accustomed to certainty.

It’s the same feeling patrons of a city’s symphony or philharmonic experience when a music director or conductor moves on after many years. Supporters grow to expect continuity at the hall. The music should sound a certain way and the performances should achieve an honest standard. When that all ends, it can be jarring.

For 20 years, Robert Shaw was city’s maestro at the Atlanta Symphony Orchestra. He was a choral guy, and that was never my bag. But even though Shaw was no Bernstein, he gave a Southern arts community that was trying to get on the map a long, successful run. When Shaw stepped aside in the late '80s, Atlanta was a far cry from the artistic backwater it was when he started.

Hawks fans have lived with the same reality for several years. As a class, they never had championship ambitions, but after years in the wilderness, the serious fans among them were generally satisfied with the Joe Johnson-Josh Smith-Al Horford Hawks.

Johnson wasn’t transcendent and definitely wasn’t worth the money, but he gave the team a chance to win every night -- and more times than not, it did. Fans who went to a home game from the moment Johnson, Josh Smith and Al Horford came together in 2007 to the end of the past season had a 70 percent chance of watching a home victory.

The product wasn’t all that spectacular stylistically -- though Smith had his moments -- but in an era when there are fewer constants in sports than ever, the Hawks’ firm place in the NBA’s upper middle class provided a decent life for fans in Atlanta.

With Johnson gone, they don’t know what to expect in 2012-13. Has Ferry officially blown up the enterprise, or is there a chance the team can craft a decent pick-and-roll offense with Jeff Teague at the helm, newcomer Lou Williams on the wing and the familiar, versatile front line of Smith and Horford?

So when the old Omni gang asks me what’s going on, I tell them to expect even more uncertainty and to embrace it. Of course, telling sports fans to embrace uncertainty is like telling a goldfish to recite verse, especially when those fans have concluded that steadiness and a .600 win percentage are ends unto themselves. They aren’t all that hospitable to the idea that resigning yourself to 45-50 wins and a middling playoff seed annually doesn’t make a lot of sense, even while they acknowledge the logic behind the argument.

I recently made the case to a friend that the more forcefully Ferry swings that wrecking ball in Atlanta, the better. This friend then reminded me that, growing up in Atlanta during the Wilkins era, we never bitched about the futility of pulling for a 50-win team. Those were blissful times. Every season, our team was in the conversation. The Hawks had a recognizable core -- ‘Nique, Doc, Willis, Tree, Randy, Spud, ‘toine, Cliff. Even Koncak -- and the Hawks had a puncher’s chance against the Celtics and Pistons in a seven-game series.

Looking back, there was definitely some lingering disappointment that the team didn't fulfill its full potential, but we still saw a lot of compelling basketball. The Hawks won a ton of games during our formative years as fans, so why on earth would we have wanted anyone to upset that security for the sake of getting worse … for the sake of getting better?! Can you imagine how we would’ve reacted had the team been ripped apart during a period of sustained success because of … payroll flexibility?! In fact, you know when things started turning sour? When management tried to get cute and signed Reggie Theus and Moses Malone, both on the other side of 30, in an attempt to push all in.

It would be uncharitable to classify this kind of thinking as Stockholm syndrome, even if it’s rooted in defeatism. Ferry’s strategy is the right tack at the right time because the Hawks desperately needed to get out from under Johnson’s contract if they ever want to play an Eastern Conference finals game, something they've never done.

But that doesn’t mean there aren’t costs to efficient team-building. Forty-five or 50 wins a season would nourish a lot of fans in places like Oakland, Washington, Milwaukee and even New York. That might not be a recipe for a title, but we all need to be fed.