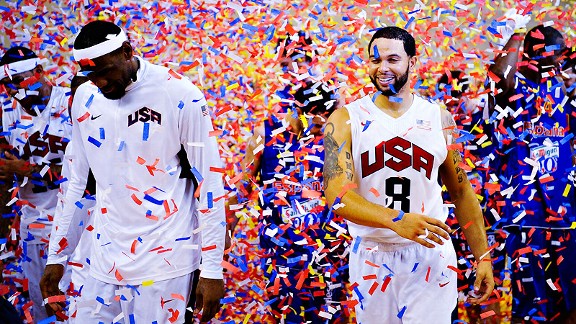 The battle is on to control stars like LeBron James and Deron Williams in the NBA offseason.

David Stern has been musing for months: Maybe it's time to take a page out of soccer's playbook by holding the best players in the world out of the Olympics.

In soccer, the FIFA World Cup shows off the deep end of the talent pool. Age restrictions, meanwhile, keep Olympic soccer in the shallow end -- only players 23 and under, plus up to three older players are eligible.

Stern's idea comes out of left field, Mark Cuban's imagination, or both. And mostly it seems quirky and maybe even harmless.

But in reality it is the opening salvo in an almighty sports business battle which poses a profound threat to the Olympics as we know them and cracks the door open for the NBA to truly lead the global game.

A second-tier tournament isn't worth much

There is limitless appetite to see the best in the world do almost anything. Just below that level, however, sports have long struggled as entertainment.

Soccer holds back its best players from the Olympics in order to make FIFA's signature event, the World Cup, matter more. And oh boy does it ever work.

Case in point: The Spanish men's soccer team is, at the moment, legendary. Spain entered the Olympics with the chance to become the first team to ever reign as World Cup, European and Olympic champions at once.

Instead: elimination, in three short days.

With the legendary players who made that Spanish national team World Cup champions in 2010 and European champions in 2012 mostly on vacation at the moment, Spain opened play with scoreless losses to Japan and Honduras. Anyone who has heard the words "Dream" and "Team" together, however, knows the best athletes in the world make the Olympics far more interesting.

If it's not the best in the world, what is it? If Stern's plan goes through, and if LeBron James and Kobe Bryant sit out while Anthony Davis leads Team USA, Olympic basketball would serve mainly as a reminder that some other tournament matters more.

In most of the world, the FIBA World Championships -- which features more teams, and many say a better format -- were long more important than the Olympics. But to U.S. audiences, the Olympics have always been the thing.

That could be changing however, helped in no small part by a name change that reminds viewers of soccer. FIBA recently renamed its World Championships the World Cup, just like FIFA's.

By steering the stars away from one tournament and toward another, Stern can play kingmaker and anoint one or the other the most important basketball tournament in the world. (Related: Is that really Stern's call to make?)

There are various reasons Stern might want to keep top players from the Olympics. NBA owners, Stern's bosses, have long chafed that Olympic organizers not only profit off "their" stars, but also expose them to injury risk in the process. The NBA also has the organizing muscle, media relationships and facilities to put on a first-rate show.

Perhaps by not just working with FIBA, but partnering with it, as the league has discussed, the NBA could create a tournament that would crush what happens in the scaled-down Olympics. More stars, a more exciting format, better sponsors and everything else.

Sources with direct knowledge of the talks say there have been informal talks with the players' association, which is amenable to the idea. There is even a business model to copy, from Major League Baseball's World Baseball Classic. The costs of that tournament are funded by MLB. Profits, if any, go to MLB, participating nations and the MLB players' union to distribute.

Mark Cuban has pointed out several times that the NBA could do all of that without FIBA -- and keep more of the profits.

It would be the ultimate payoff of the league's long-term investment in spreading the game globally -- and the ultimate pressure on the International Olympic Committee to do what it asks its athletes to do: to raise their games in the face of stiff competition.

There's ample reason to believe fans around the world would love an NBA-run global tournament. Most sports simply don't have a single unifying brand as powerful and recognizable. The NBA is synonymous with the globe's finest hoops around the world -- it's literally one of the most recognized brands not just in the U.S. and basketball-loving parts of Europe, but also across Asia.

FIFA has no such stranglehold over global soccer. The NFL dominates football, but is hardly as global. The NBA is decades into this globalization game, and it is poised to win it.

Which is the more valuable global logo right now: The NBA's red-white-and-blue player -- which sells everything from cell phones to milk all over China day in and day out -- or the Olympic rings? Probably the rings, but it's a tribute to the NBA that it's a legitimate question.

The NBA has been aggressive in exporting an American game, and importing players from overseas, it has been comparatively timid in adjusting the product to that global audience.

It's a crying shame that, through all that, basketball has no definitive international championship akin to soccer's World Cup. And it's a glaring opportunity that the NBA is well positioned to fix.

PART 2: The devil in the details.