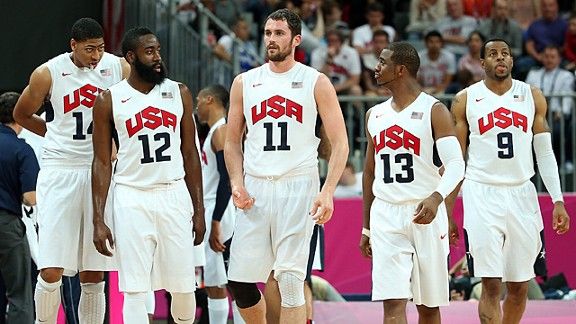 Team USA will face Australia in the quarterfinals on Wednesday.Team USA has won 47 straight games in international play and 14 straight Olympic games, but it won’t mean anything if the Americans can’t win three more and capture their 14th gold medal.

That road will continue on Wednesday with Australia, a team the Americans are 13-0 all-time against in FIBA tournaments. But the Aussies are hot, coming off a win over Group B winner Russia.

HOW CAN AUSTRALIA UPSET USA?

MillsIt all starts with Patty Mills, whose 20.2 points per game are tied for second-most in the Olympics.

One of USA’s biggest strengths has been its transition offense, as the Americans lead all teams in transition points. Australia has held teams to the third-fewest points per transition play in Olympic play.

How about modeling what Lithuania did in its five-point loss to USA?

Lithuania defended the Americans’ isolations plays well, holding them to 7-of-21 shooting on 23 isolation plays. On the six isolation plays that Lithuania’s defense committed to the offensive player, USA shot just 1-for-6 on field-goal attempts. Meanwhile, Lithuania only ran three isolation plays.

WATCH OUT FOR RUSSIA

Russia was a Patty Mills buzzer-beater away from finishing pool play undefeated. The Russians may be the team that could pose the biggest threat to Team USA in the Gold Medal Game.

Russia is defending the 3-point arc as well as any team in London. The Russians are holding opponents to 28.7 percent 3-point shooting, which leads all teams.

The Russians have held teams to the fewest points per transition play in Olympic play. They’ve held opponents to 38 percent shooting in transition, while every other team in the quarterfinals is allowing teams to shoot over 50 percent in transition.

• LeBron James has scored 225 points in his Olympic career. He can become USA Basketball’s all-time points leader in Olympic play if he scores 56 more. David Robinson is the all-time leader with 280.

• Spain’s Pau Gasol leads everyone in scoring through pool play. Gasol led all scorers in the 2004 and 2008 Olympics.

He has a chance to become the second player ever to lead three straight Olympics in scoring. The only player to do so was Oscar Schmidt for Brazil in 1988, 1992 and 1996.