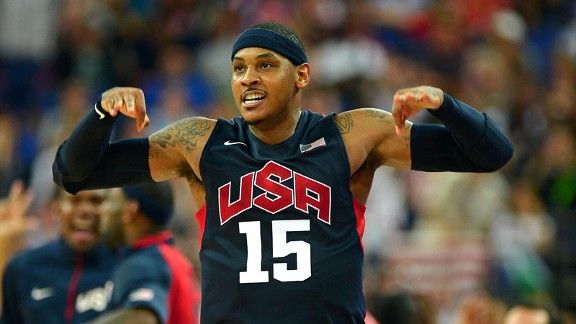 Most Points per 48 Minutes
Single Season in NBA History

Only one player in NBA history has averaged as many points per 48 minutes in an NBA season as Carmelo is averaging in the Olympics. That was Wilt Chamberlain (49.8) in 1961-62.

But even if Carmelo was playing without a 3-point line and every basket counted as two points, he'd still be averaging 39.9 points per 48 minutes, which would still be more than every player in the NBA last season and 13th-most all-time.

Why has been Carmelo been so efficient offensively?

He's shooting 53 percent on jump shots, tops of any Olympian with at least 25 attempts.

Similarly, Carmelo has drastically improved on guarded catch-and-shoot jumpers the last couple seasons. His percentage skyrocketed from 29 in 2009-10 to 47 last season, which ranked 5th of the 134 players with at least 50 attempts. Giving extra value to 3-pointers, he had the 3rd-highest effective field-goal percentage of those same 134 players.

Maybe he's shooting so well because he's getting a ton of open shots? Not really. Only 35 percent of his catch-and-shoot jumpers have been unguarded in the Olympics. In the 2011-12 NBA season, more than half of his catch-and-shoot jumpers were unguarded. But he shot just 28 percent on those shots last season, which ranked 194th of 199 players with at least 50 attempts.

If Carmelo can find easier ways to score other than isolation, the Knicks could reap the benefits of his best NBA season yet.

In the meantime, he and his USA teammates face Spain on Sunday at 10 AM ET with a 14th gold medal in sight.