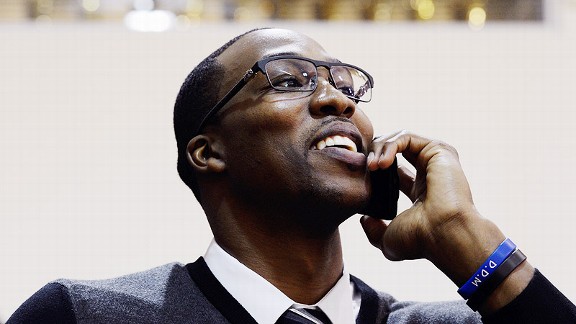 If Dwight Howard's a Laker, the thinking goes, somebody must be blamed. Why not David Stern?

Dwight Howard is a Laker, and that's prompting strong reactions.

But in most of the NBA, the reaction is far less subtle. It's a tantrum, along the lines of: "IT'S NOT FAIR! Of course the Lakers ended up with another superstar. That's the way the system is set up in today's NBA."

And that last point just drives me crazy.

The way of the world

Like most houses, ours is not welcoming to flies. We have screens in every window. We holler at the kids if they leave a door hanging open. We don't have a doggie door, an attic exhaust fan or the like. We keep the food flies like in the fridge, and the garbage can has a lid.

And yet ... flies happen. They just do. Serve a big plate of grilled salmon, say, and sure enough those little jerks emerge from ... wherever they hang out ... to join the party entirely uninvited.

It's just the way it is.

Now, one way I guess you could react is to get all angry and say THAT FLY IS A CONDEMNATION OF THE ENTIRE SCREEN SYSTEM. Why bother closing the door, using tupperware and all that hassle? It doesn't work.

But that's a crock, of course. Flies show up on your food because that's nature. They were born to do that. "The system" of screens and doors does what it can, but it doesn't do everything. So, you can look at that fly or two and be thankful there aren't two dozen, as there might be if you were outside.

Nobody screwed up. It's simply that flies have magnetism to food, and magnetism is powerful.

It's the same in business. The most qualified law students are drawn to the best law firms. The best business school graduates tend to gravitate to a handful of dominant Wall Street firms.

And -- did you see how happy they were on Team USA? -- the best basketball players tend to end up on the best teams. The most talented in all fields gravitate to the best firms. That's commonplace, natural and not at all unique to basketball.

I'm not saying I like that. But to say that it happens in the NBA because of the system is straight loco. It's because of nature. Like the screens in your house's windows, the system tries to stop that, with a growing set of taxes, revenue sharing, salary caps, a weighted lottery and the like. The system is designed to even out that playing field somewhat. It tries.

If you must blame the system ...

Everybody knows the Magic could have gotten far better players than Arron Afflalo, picks and the like for Howard. But Howard is a Laker because the Magic liked the Lakers' offer better than the Nets' offer, the Rockets' offer or anybody else's.

Those upset that Howard is a Laker howl at how bad this system is for small-market teams like the Magic -- and ignore the reality that the only reason this happened was because the Magic chose this offer. This was their decision alone. They perpetrated this deal; they cannot also be victims of it.

The Magic chose this miserable package.

I have to believe they liked that offer best because it will most allow them to follow the model of GM Rob Hennigan's former employer, the Thunder. OKC was terrible for years, by strategy -- in order to collect talent high in the draft.

This is what another former Thunder front office employee, Rich Cho, has been doing with the Bobcats -- and he set a record for losing. The Magic will be right there with the Bobcats for a few years.

The Magic took a bad deal because that's what they were looking for. That's something the NBA should change. The best players in the world almost all go high in the lottery, to a collection of the teams that lose the most. If the best players found employment almost any other way, there'd be no reason for the Magic to have made the crucial decision to make the rich richer and the poor poorer.

But for the lure of high picks born of terrible play, the Magic would have demanded great heaps of talented players for Howard, and the league wouldn't feel so lopsided.

The system is coming for the super teams

The new CBA, they said, would make owners think twice before uniting superstars. And who's to say it won't? In that regard, the juicy parts of the new deal haven't kicked in yet. ESPN.com CBA expert Larry Coon emails to explain what's in store for the Lakers if they keep this intimidating roster together:

The Lakers will have a tax bill of around $30 million next July, and in retrospect, will view this season as their salad days -- it’s the last one where the tax rate is dollar-for-dollar. Starting in 2013-14 the new “incremental” tax takes over, where being $30 million above the tax line will mean paying a whopping $85 million tax bill.

And it gets worse. Starting in 2014-15 teams will pay an even higher rate for being repeat offenders -- defined as paying tax in at least three of the four previous seasons. A team $30 million over the tax line will pay -- brace yourself -- an additional $115 million in luxury tax.

After adding up their payroll, luxury tax bill and revenue sharing contribution (projected to be $49.4 million in 2013-14), even the Lakers have to stop to consider whether this simply can be written off as the cost of doing business -- and that’s the future if they’re paying players with salaries like Bryant, Howard, Gasol and Nash.

I asked Coon to make some rough estimates, and he guessed that salaries, revenue sharing and luxury tax could cost the Lakers close to $240 million in 2013-14. And the season after that is when the especially punitive repeater tax, for perennial high-spenders, kicks in.

Even back when players cost the Lakers about a third of that, they made transactions to cut payroll. In the lockout, they laid off video coordinators and the like to save the table scraps. After the lockout, but before facing these kinds of bills, they pointed out that it was tough to make money anymore.

In other words: This Lakers roster is barely affordable now and due for a massive day of reckoning when the NBA's real "system" is fully up and running.

The Lakers have earned success

If you love the Thunder or the Pacers or the Spurs, it's easy to wonder how good your team would be if you had the Lakers' many advantages, most importantly that big, lucrative local television market. And there's something to that; the Lakers' foray deep into new-CBA luxury tax is a tribute to their massive local television deal, which will never happen for New Orleans.

But being in New York or L.A. is merely part of the story. The NBA has four teams playing in the best markets imaginable: The Lakers, Clippers, Nets and Knicks.

And yet, clearly being in a big market isn't nearly enough to guarantee success. Those four teams combined over the last two years have a record of 294-298. Yes, they have huge money advantages. However, as the Knicks have proved time and again, thanks to the cap rules, a willingness to spend aggressively does not equal contention. Overspending, meanwhile, locks up roster spots with bad deals and is the only way to really remove yourself from contention for years. (Cheap teams have cap room that can be turned into real stars. The Heat united LeBron James, Dwyane Wade and Chris Bosh by winning the race to have the league's smallest payroll in the summer of 2010.)

As Bill Simmons wrote on Grantland the other day:

Take it from a bitter 2012 Red Sox fan -- just because you're a big-market team that can outspend everyone doesn't mean things can't get horribly screwed up. The Lakers nailed six franchise-altering moves over the past eight years, and that's not including last month's Nash trade, when they somehow convinced a Pacific Division rival that absolutely hates them to hand over their most iconic player for some meaningless picks and cap space. What an amazing run.

The Lakers have not just been smart, they have also taken enormous risks. They traded basketball's rarest commodity -- a productive 7-footer in his prime -- for a high school shooting guard determined to take over the league. It was a risk, a HUGE risk, to trade Vlade Divac for Kobe Bryant. But that move, and several others like it, is precisely why the Lakers have been important for the last decade-and-a-half. A very high percentage of their personnel moves work out.

Various analyses have determined that if you trade a top big man, you simply can't get enough value in return to make it worth it. The Lakers did it with Divac, and now have done it again with Andrew Bynum -- whom they traded for an impending free agent coming off back surgery. Yes, this is risky.

Nash and Howard are not joining a juggernaut

Before Howard and Nash, the Lakers struggled to keep up with the league's best in the postseason.

Kobe Bryant, Pau Gasol, Andrew Bynum ... they have won titles together, and thus we are conditioned to see them as contenders.

But this is hardly a case of the best getting better. Instead, it's a past-its-prime team taking on huge risk (namely, that they would have given up Bynum for a Howard rental) in the hopes of contending a year or two longer before the luxury tax or father time blows it all apart.

My main thought is: If the Lakers can figure out a way back to the Finals in 2013, tip your cap to them. The Heat and Thunder are great and built to stay that way. Knocking off one or both is a tall order. This was an against-all-odds Rambo-type front-office performance. The salary cap is getting harder every year, and given the way NBA spending is headed, the Lakers really do have an insane amount of money committed to Bryant. You take far too much credit away from Mitch Kupchak and the Buss family when you imply their success is based merely on luck.

Don't let the media hype around the Lakers blind you. Nash and Howard joined a team that needed all the help it could get to contend.

Now that they got that help, we'll see if it's enough, and how long it can last. If it works, it'll be despite, and not because of, the NBA's "system."