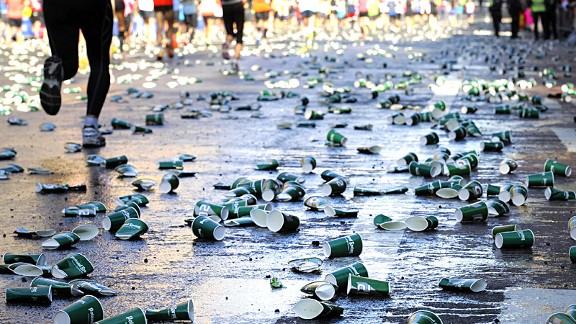 A grueling, long slog ... success in the NBA is a marathon.

Pitch black outside and in. Wind blowing, rain falling. The clock says a little before 5 a.m. I click off the alarm that hasn't gone off yet, swing my legs to the floor, guzzle the half-bottle of flat seltzer on the bedside table, grab the clothes I left out the night before and get all the way downstairs before turning on a light.

After a half-hour of tea, toast, changing clothes, looking at the newspaper, and more water (always more water) it is still perfectly black outside -- somewhere behind those clouds is a nearly full moon, but those clouds are thick. So I strap on a goofy $14 Energizer LED headlight my son got for a camping trip, hope it'll be enough to keep some sleepy early-morning driver from veering into me, and head off for a wet pre-work ten-mile run.

That was this morning. And that kind of thing has become typical.

David Thorpe called me the other day, all excited. He was reading Jack McCallum's "Dream Team" and was delighted to discover one of his favorite words: "slog."

"We tend to think of a superstar's career as one long march into immortality," writes McCallum, in a section about Larry Bird, "but in fact, near the end it's usually characterized by a slow and sometimes painful slog toward the finish line."

This is a big part of what Thorpe teaches his NBA clients, and it's something I find myself thinking about often. It goes something like this: It may appear that NBA games are won with big moments when everybody is looking -- dunking over people, blocking shots, hitting a momentous jumper. And once in a while that does happen. But the reality is that many more careers and games turn on getting things right in the millions of small moments when nobody is looking. The big moments will always dominate the Hollywood version of events. But in real life, if you want to do the most you can to get the best possible results, it's a long game of putting together one solid day of training after another.

You want to know who's going to have the best NBA career? You could do worse than to simply figure out who puts in the most work to prepare.

Like when, as McCallum describes, Larry Bird would get up at 5 a.m. every day of the summer to work out somewhere in Indiana. Training to succeed in the NBA isn't about a highlight or two. It's a decades-long marathon, made mostly of work.

Alex Honnold, solo free climber, blows my mind. I know little of his sport, but nevertheless this video literally makes my palms drip with sweat (for real) I'm so nervous for him. The whole thing is so damned inspiring.

It's also something I think about whenever I'm facing something tough, whether at work, on a long run or anything else. Honnold is up there without any kind of rope or safety device of any kind, hanging off a cliff face 1,500 feet above the ground. Thousands of times per climb the choice is: Make a good sound rock-climbing decision, or die. Time and again, through hundreds of days of climbing per year, he does not die. One good little decision after another, many thousands of them, cling together to form the closest thing Honnold has to a safety net.

How does he do it? By not panicking. If you're trained and in shape like him, one sound rock climbing decision is simply not that hard to make. Just keep doing what he is good at doing. He says that he is not an especially powerful climber, and his fingers aren't the best, etc. But he has the amazing attribute of not bonking, or melting down. Just keep going, don't self-defeat. With that kind of sustained effort, really hard things are doable.

Jerry Seinfeld is asked time and again how to build a great career in comedy. In an insightful Jerry Seinfeld on Comedy interview (as transcribed by Matt Ruby) he shares his secret, which is, essentially, that there is no secret:

They have this comedy convention in Las Vegas. They have the agents and the managers and the talent scouts from the shows and they have these seminars and they have discussion groups. And I would like to be in charge of that thing. I would get rid of all those people and I would bring all the comedians into a big room and I'd have a huge banner come down that says, "Just work!" And I'd send everyone home.

Everyone wants to know if there's some way of getting around all the work and I'm here to tell you: "No." If you want to walk the tightrope, that's what it takes.

How many thousands really pursue comedy hard for six months? How few keep working at it for years?

So many things in this life are not that hard at all in small doses, but nearly impossible in large ones.

Watch the Olympic marathon. Most of us can run along with the fastest runners for some distance. Maybe a step. Maybe even 100 yards or more. A few seconds of running hard is easy. Keep it up for 26.2 miles, though, and you're one of the best ever.

It's easy to get up and go to work. But almost nobody can do that every day for a decade. It's easy to be a kind person -- but saintly to carry compassion through each and every one of life's many challenges.

The other day I caught a big, loud health-care debate on the radio. Basically, the government doesn't have the cash to pay for the health care everyone needs. The other choice? That people, most of whom are similarly short of cash, pick up more of their own medical bills. In some ways this is the essential crisis of our times.

But what's crazy about it is that we all know that health care costs would drop mightily if more people would commit, for the rest of their lives, to simple, boring things like quitting smoking, eating better and exercising. Trillions in savings would materialize through the years, thanks to all the heart disease, diabetes and the like that would never need any treatment at all. Nothing about eating romaine lettuce and taking long walks is difficult -- but to get the health effect you have to do that kind of stuff not for a week or two, but for something more like a decade or two. The magic is in sustaining the effort.

This is the kind of stuff I have been telling myself over the last few years, as I have transitioned from somebody who runs to somebody who actually trains as a runner. Every issue of every exercise-related magazine cries about the magic of this or that workout or diet. But I suspect the benefits of any one program over another is nothing compared to just honoring one of the better programs day in and day out for a good long time. My new religion is keeping at it.

Reading "Born to Run," a few summers ago was part of my running renaissance. Falling in with friends who like to run has been huge. Mostly, I like how the whole thing goes. I read a lot, and improved my form, and surprised myself a year and a half ago at a half-marathon. I raced with no watch, nor any particular time goal. I had trained some, though, and worked on my form. By the time it was over, however, I had blown away my wildest pace dreams. That was fun.

Then there was a relay across New Jersey with some serious runners, which was a thrill. I agreed to do a marathon last fall, mostly out of solidarity with my dad. That project was the one that really got me to commit to a training schedule, six days a week for eighteen weeks -- and I did every one. By the time I blew away my goal time, qualifying for the Boston Marathon with more than six minutes to spare, I had done a complete 180: I used to love the freedom of running -- I could do it with whatever found time I had, and if I skipped it or dogged it nobody cared or noticed. Now I realized the difference: Get on a real, organized, professional training schedule, don't miss a single day and give it 100 percent. It's not that much different a lifestyle than merely exercising every day. But the results are totally different.

But for a few weeks here or there, I have been on a training schedule ever since. He has no idea who I am, but I have trusted no man as much as I have trusted Hal Higdon the last year. He's one of many running coaches with free online training programs. Our most precious resource is time, and I give an absurd amount of mine to that man.

For 12 weeks last spring, beginning in the cold mornings of winter, I was entirely beholden to his half-marathon schedule, which got me a tricky result: 34th out of 2,672 runners. Not nearly good enough to really brag about for a real runner -- what would people who say second place is first loser say about 34th? But I say to hell with that. I last took running seriously in high school. This is something I never thought I'd do. These are times I never thought I'd run. This is a thrill.

Power to the training schedule! Run like a bat out of Hal.

Despite the short sleep and long travel of the playoffs I completed every day of Hal's 10-week, 15k program in time for early August's relay across New Jersey, which ended with all of us standing around grinning on the beach, delighted that we were once again one of the older, and faster, teams.

A week later I launched into his demanding marathon regimen in preparation for a race this fall. There is almost always a printed chart next to my bed, telling me how far I have to haul each day.

But who'd want to chase this thing, or NBA success, or a stand-up comedy career, or any other thing, the wrong way? The right way is not so easy, but in the long run it's beautiful.