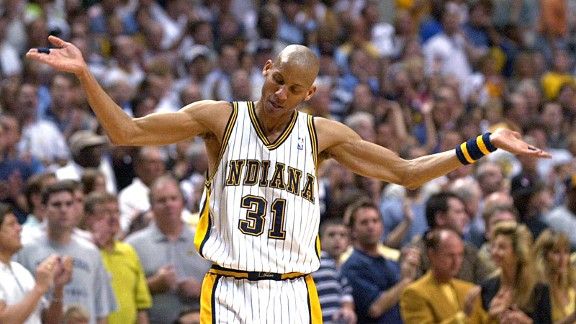 Reggie Miller is second all-time in regular season 3-pointers and first in postseason 3-pointers. He'll be enshrined in the Naismith Memorial Basketball Hall of Fame on Friday.

He’s 14th in NBA history in points (25,279), second in career 3-pointers, behind only Ray Allen, and nobody has made more 3-pointers in the postseason.

Miller was always relied on in his career to take the Pacers’ biggest shot in crunch time (defined as the final five minutes of the fourth quarter or overtime and the score within five points).

In the final nine seasons of his career (regular season and playoffs), Miller made 142 three-pointers in crunch time, 54 more than the next closest player in that time period.

Miller and Michael Jordan met just once in the playoffs, a memorable 1998 Eastern Conference Finals that the Bulls won in seven games.

Outside shooting was one area where Miller got the better of Jordan in that series.

Miller made more three-pointers (17) than Jordan attempted (15) and the Pacer was better overall from 15+ feet.

This Hall of Fame class has a UCLA flavor, as Miller is one of three members who attended UCLA, along with Jamaal Wilkes and Don Barksdale.

It’s also a proud day for the Indiana Pacers franchise as both Miller and ABA star Mel Daniels enter the Hall. Miller and Daniels make up two of the five jerseys the Pacers have retired.