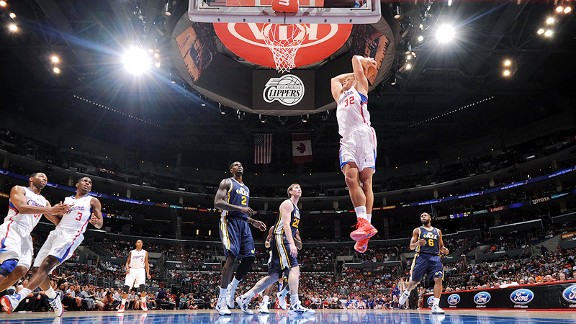 LOS ANGELES -- NBA players tend to be adaptable creatures when it come to sleep, capable of catching z's on cross-country charter flights and whenever else they can steal a few hours. The Los Angeles Clippers have even fashioned a prank called #GotEm (yes, that's a hashtag) around catching guys dozing off on the team plane.

Not-so-fresh off a week-long jaunt to China, the Clippers are having trouble adjusting to the 15-hour time difference, as GotEm has given way to a fierce battle of jet lag. Eric Bledsoe and Blake Griffin have found themselves awake at odd hours this week.

Whatever residual effects Griffin might be suffering after the transoceanic trip, few of them were evident in his performance in the Clippers' 96-94 win over Utah on Wednesday night at Staples Center.

Griffin unfurled the entire portfolio in the first period:

Life as a Utah big man

So much of being a frontcourt player in the Jazz offense revolves around moving from block to block as a screener and screenee. That constant motion demands precision and timing, a certain rhythm that can intimidate or confound a guy who has been accustomed to setting up in the low post, then awaiting an entry pass.

When the Jazz acquired such a player in Jefferson a couple of seasons back, there was some reasonable skepticism. Jefferson was a throwback, a tireless, hulking pivot man who owns the left block, starting and finishing his offensive possessions down there. It took Jefferson some time to adjust to Jerry Sloan's offense, a system that has remained very much in effect (with a few tweaks) under Ty Corbin, who succeeded Sloan in the spring of 2011.

Jefferson, who is in the final year of his contract, may or may not be in Utah this time next year (or sooner) given the embarrassment of riches the Jazz have in their frontcourt. Wherever Jefferson lands, he credits his time in the Utah system as essential to his maturation as a low post.

"Actually, the flex has really helped my game over the last two and a half years," Jefferson said prior to the game. "It's really helped me out big time. In Minnesota, it was all about fighting my way on the block. Throw the ball inside. Try to score against double-teams. With the flex cuts, it makes my job a lot easier. If I set good picks and get my teammates open, I bounce off that and now I'm the one getting the layup."

Systems matter, and Jefferson has not only learned how to pass out of double-teams but, as he alludes to above, he understands how to make himself useful when he's not the focal point of a set.

Second-year big man Enes Kanter is another big who isn't necessarily a natural fit in the flow of the Jazz offense. We're talking about a guy who recorded eight assists in 874 minutes during his rookie season -- a most unJazzly stat. But on Wednesday, Kanter appeared comfortable in the confines of the Jazz offense. Taking a cue from Jefferson, he got into a little crossing flex action along the baseline with Randy Foye in the second quarter and, voila, Kanter used the action to get a deep catch on the left block, which he converted with a nice fake to the middle, then a reverse pivot to a strong drop step and layup.

A little later he gave Jordan the treatment with an assertive spin and drive, drawing a foul. And like Jefferson, Kanter is gradually learning to look over his shoulder to the arc when the double-team arrives. He's also been a beast on the boards, a trend that started the instant he arrived in the league. Over four preseason games, Kanter is averaging 12.5 points and a hair over 10 rebounds in just under 20 minutes per game.

Kanter still needs to cultivate the reflexes and timing to flourish as Jazzman. Like Jefferson, he's not a perfect fit. But just as Big Al has used the system to expand his game and lure defenses away from Utah's weak side actions, so too can Kanter if he continues to put in the work.

Jeremy Evans’ ceiling is an object of fascination among hard-core Jazz fans. He’s bouncy and rail thin, lethal on the break and can jump out of the gym standing still. On Wednesday night, Evans thoroughly embarrassed poor Ronny Turiaf, first by flying in from the baseline and swatting Turiaf’s face-up jumper from 14 feet, then by collecting the remains, dashing the length of the floor, then throwing down a tomahawk dunk on Turiaf, who had the temerity to actually run back on the play. The sequence set off a spark inside Staples Center among a crowd that's grown accustomed to some pretty hot pyrotechnics.

In fact, they are talking about practice

One theme you hear repeatedly in the preseason is that live games aren't nearly as vital to the process of preparation as a good practice. Jazz guard Mo Williams sounded this call before the game as he explained why he wouldn't play in Wednesday's game.

"Practice is more important than games right now," Williams said. "I haven't missed a practice. The games -- you go in there and play 20 or 22 minutes. I'd rather be in practice with my guys. That's where we're going to get better."

Moments earlier, Clippers coach Vinny Del Negro cited the same rationale for sitting Lamar Odom. Del Negro expressed that he'd been pleased with Odom in practice, suggesting as Williams did that, for vets like Odom, games are afterthoughts. It's the practices, where schemes move from the whiteboard to the hardwood with repetition and explanation, that are the mother's milk of October basketball.

With the game tied 92-92 inside of a minute, the Clippers couldn't find anything off a Bledsoe-Turiaf high screen. After some meandering, the ball landed in the hands of Crawford about 28 feet from the hoop. Isolated against DeMarre Carroll with nine seconds remaining on the shot clock, Crawford used a crossover then a devastating hesitation move to breeze by Carroll to the rim for the layup, and-one.

The lead would hold for the Clippers and Crawford, ever the improviser.