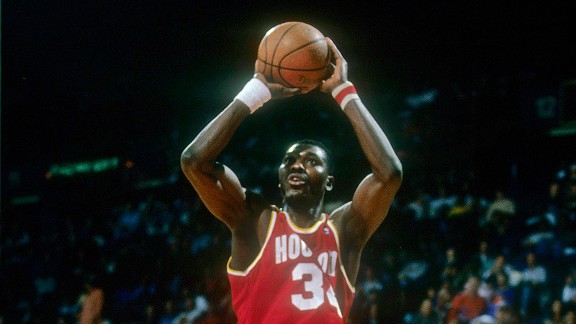 With all eyes on Hakeem Olajuwon, everybody missed a shocking moment of playoff crunch time.

Nearly two decades ago, a bit player on an NBA team in overtime of Game 7 made an outlandish, absurd and befuddling choice at the height of NBA drama. At the least, this act could have cost his team a playoff series. It also could have caused a humiliating referee scandal or cost him his job.

Everybody saw it, and nobody, not even the player himself, realized what was happening.

“I just wanted to help, do anything I could,” he explains, now that he has seen it all on video.

Hakeem Olajuwon has the ball with nine seconds left. His team is down one and no teammate is closer than 15 feet away. The "D-FENCE” snare drum blares, but the Seattle crowd is too immersed in the action for an organized chant. Instead they murmur a warble of concern as Olajuwon dribbles in the reflection of every pupil in the building.

He cuts a lonely figure with his teammates so far away. Three Sonics rush at the post-play savant as he picks up his dribble. One pivot foot is welded to the exterior of the dark green paint. Fortunately for Hakeem, his eyes work better than most: He sees the enveloping horde and quickly readies a pass. Four Rockets seem open enough. With so little time on the clock, these players represent four doors of fate, and one door in particular can impact this game in a fraught way that I doubt Hakeem grasps at that moment. What will the great Olajuwon do?

Remember that in 1993 Dream did not yet have all the “winner” qualities associated with his name now. The Hakeem of my dreams never missed a clutch shot, never turned the ball over. The one time Hakeem traveled, it was probably such a display of physical artistry that the refs applauded and paid the violation forward to Patrick Ewing at some later date. If Olajuwon had existed before 1994, before titles, it was only to preface that which later validated his greatness.

So it was quite shocking to see Olajuwon on NBA TV, in this 1993 Game 7 overtime moment, feebly giving the ball up under duress. You can watch the whole thing online for yourself. Even though he successfully passed to Vernon Maxwell, it set up an errant, drifting baseline jumper. Houston lost the series, and this pass was one small, but undeniable part of the reason why.

There were better options.

I rewind the DVR and spy a cutter near the basket. Had Olajuwon hit Robert Horry early in the possession, Houston would have likely won the series. Horry was calling for the ball with both hands up, presaging a later willingness to take on responsibility in big moments.

I rewind again, this time spotting Matt Bullard above the arc. Bullard was a 3-point ace, and Olajuwon could have found him with a bounce pass. It might have been a tough angle, but retrospect declared it a superior option to Maxwell.

Perhaps the most open man of all is this mysterious figure by the baseline. He’s farthest from the action, shrouded by low-definition fog -- a shimmering spirit. I make out a smudgy “22” on his uniform. My TV is paused at the six-second mark, right after Hakeem makes his ill-fated pass. Could Olajuwon have hit this open blur sooner? For shame, Dream. For shame.

Fewer passing angles are more difficult than the one to an invisible man. There is no player 22 sighting in this entire overtime until the final play at exactly the six-second mark. When Hakeem has the ball with eight ticks left, there is no 22. Two seconds later, he pops up on screen like an animation trick, ready for a pass. This guy really is a ghost, a sudden visitor from another world.

Fortunately that world was the crowded Rockets bench and not some demonic dimension hidden in the floorboards. “No. 22” is indeed a mortal and his name is Winston Garland. He’s a bit player, nearing the end of a short-lived NBA career. Though this “Winston Garland” scenario is more plausible than a supernatural incident, the act itself still confounds. Men usually don’t act this irrationally. What, exactly, happened?

He just waltzed onto the floor, an errant sixth man, joining the battle in defiance of every rule and structure that governs the game.

He simply joined the action and started playing. And though it was right there in front of everybody, nobody did anything to stop him.

Garland did it as though people do that, strolling past his teammate, and future Oklahoma City coach Scott Brooks en route to the action. Brooks made no effort to stop Garland, and even followed him briefly, onto the fringe of the hardwood, as though magnetized to Winston’s back. Scott Brooks was wearing a Rockets warmup jacket, attire that would have surely outed him.

Garland moved so quickly, so decisively that you would assume he belonged in the play. With so many eyes on the ball, it is difficult to believe that any fan recognized an extra man.

The things we don't see

The magician Harry Keller was once said that a “brass band playing at full blast can march openly across the stage behind me, followed by a herd of elephants, yet no one will realize that they went by.”

There is even a well-known basketball example of this selective attention phenomenon. In a United Kingdom advertisement for not running over bicyclists, the viewer is asked to count how many passes a team in white shirts makes. The average observer struggles to chart the passes as a man in a bear suit moonwalks through the flying basketballs, undetected. After the big reveal, a slogan appears: “It’s easy to miss something you’re not looking for.”

Who would ever look for Garland, especially as he entered the court at the exact moment when Olajuwon passed the rock? Our eyes are not trained to track a moving ball on one side of the floor, and a moving man on the other. Bipedal alligators in Rocket jerseys could have been hopping down the opposite sideline, and 100 percent of fans may well have thought in unison, “Hakeem passed.” After Vernon Maxwell missed and the ball went out of bounds, Garland was even so bold as to gesticulate “our possession” at the referees. They simply ignored him for a second time. Sonics possession, Sonics victory.

The media was none the wiser. This was a different era. Replay was not so advanced and there were no eagle-eyed YouTubers to alert the public. Had Garland caught a pass and scored at the buzzer undetected, it’s quite possible that a newspaper would have been first to tell you of the NBA’s mistake. And then what? Would the NBA have reversed the series winner? We are certain of this: Referees should have called Houston for six men on the floor and they did not.

Somebody did catch Garland, though. It just took a while. In the following days, a few Seattle coaches learned of the incident, even though they never discussed it publicly. While preparing to play the Western Conference Finals against the Suns, the coaches reviewed their climatic defensive possession against Houston. There Garland was, giving himself the most hidden of public cameos.

When I ask former Sonics coach George Karl about the sudden sixth man, he recalls, “I was not aware of it until the next couple days. I was of course watching Hakeem Olajuwon and Vernon Maxwell on the other side. But it was pretty amazing when I saw it (on videotape). Garland was actually pretty much into the play. If the ball woulda bounced a little bit further, he might have went for the rebound.”

Was this insanity? Was this a cynical ploy to give Houston an advantage? There was a little known loophole in the NBA rulebook at that time. A sixth man incurred a technical foul, but the points he produced could not be taken off the board. Had Garland announced his presence by hitting a 3-pointer, the Rockets would have been up by two. The ensuing technical may have returned one point to Seattle -- at most. A designed play to a sixth man may well have the smart move. For all Karl knew, Garland was a savvy cheater.

Garland knows nothing of this loophole, though. In contrast to Karl, Garland has not been walking around for 19 years with the knowledge of his own actions. I interrogated Garland about his game crashing, and then sent him the video. Laughing, Garland says, “Me and wife and my son, we are just cracking up watching the clips.” He had not noticed his own trespass for the same reason no one else did. In those seconds, all that mattered was Hakeem, the ball, and the score.

Garland has coached high school teams in the intervening years. His propensity for getting caught up in action to the point of rushing the court has led his wife to teasingly call him “Radio,” a Cuba Gooding Jr. character reminiscent of Hoffman’s “Rain Man,” but more unintentionally disruptive. Cuba’s mystery disorder spurs a monofocus that can interrupt games.

Winston's story could not be more clear. He was just excited, so taken with the action that his legs compelled him toward it. The bench veteran had mostly plied his trade for mediocre squads, and this was about the closest he’d gotten to ultimate NBA glory. Winston played the following season in Italy, where he “had a chance to be a feature piece.” When asked what he would have done if the ball had come his way, he replies, “I definitely would have shot it.”

I ask Karl if he would have noticed something amiss in a game-winning Garland basket and the coach responds, “we would have definitely been aware if they woulda passed it to him. If they had put another one of their top players on the court, we might not have seen it, but because it was Winston Garland, we woulda been, ‘Why the hell is he on the court?!’”

And, just why the hell was Garland on the court? Garland considers the question: “I was just trying to will us to win. Whatever we needed to do, whether it was cheering or helping up a teammate. That was my goal, probably, that was my purpose in walking on the floor.”

The moon-walking man in a bear suit had the best of intentions.