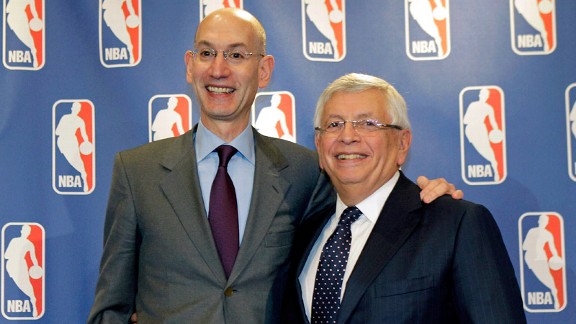 In February 2014, Adam Silver will take over as NBA commissioner from David Stern.

Fun though working for the NBA would appear to be from the outside, in reality, the day-to-day business is a tangle of legal documents, tough negotiations and walking a tightrope between many power brokers. The league's success hinges on getting every little thing right. The particulars include impenetrable collective bargaining agreements, TV deals around the world, arena finance, corporate sponsorships and owner relations; there's a reason that substantially all the NBA's highest-ranked executives are lawyers. As David Stern has led the NBA through decades of aggressive growth, into new markets, onto new platforms and to new fans, the business has only grown more complex, creating a business empire of infinite complex.

Adam Silver has long been the executive who knows how all the pieces fit together.

In his various NBA roles over the past 20 years -- deputy commissioner, president of NBA Entertainment, chief of staff -- Silver, 50, has led many of the NBA's more delicate dealings, including television and merchandising deals around the globe. During the 2011 lockout, when it became routine for Silver to join Stern on the podium articulating the league's position, it became overtly clear: Whereas Stern might occasionally bungle a name or meander in his talk, Silver was the man with every necessary fact on the tip of his tongue.

At times over the past few years, Stern has deflected tough questions to Silver in news conferences in an apparent effort to bolster Silver's image as a leader. Other times, however, he has turned to Silver as an escape from thorny business questions. By the time Stern announced in February what had long been assumed internally -- that Silver was his choice to succeed him -- no close watcher could argue with the logic. Silver was the man with the command of seemingly every issue, from NBA China to ads on jerseys.